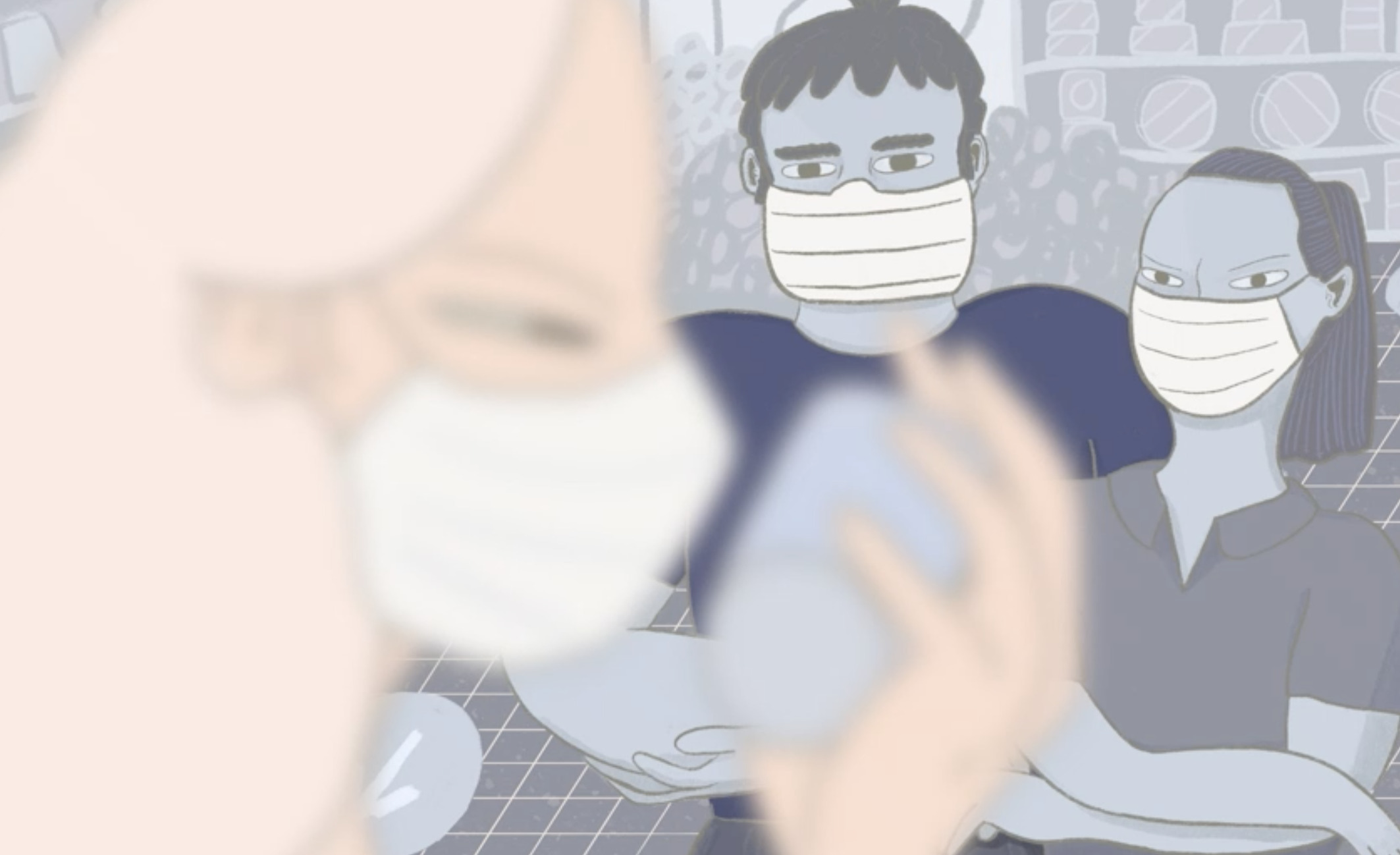 A still from Ellen Renton's 'Aisle.'

Back in May we announced the 12 artist who were selected for the second round of Culture in Quarantine commissions from the BBC, with Arts Council England, Arts Council of Northern Ireland, Arts Council of Wales, Creative Scotland and The Space. We asked Associate Lecturer at the Open University, Alison Wilde to review these works, all by disabled artists.

All of the Culture in Quarantine (CiQ) pieces I watched and listened to were created by D/deaf, neurodivergent, and disabled artists, but they all conveyed themes of universal significance. Most were related in some ways to the pandemic, especially to the yawning experiences of isolation and the utter frustrations many of us have felt, and the ongoing search for sufficient meaning and strength to just carry on. Such themes were addressed both directly and indirectly, though a few artists chose to avoid them. Indeed, there is a wide diversity of experience within the CiQ collection, each one with a unique and often unexpected story to tell.

Most told tales of disabling social barriers, some autobiographical, with several featuring the work of the writer or director within the piece. Some presented scenarios (occasionally shocking) on how the neglect of disabled people became ever more obvious under the conditions of Covid-19. One such example is Silent World, featuring Signkid (Kevin Walker), a Deaf-rapper who is forced to deal with the effects of spreading poisonous gas clouds, a fictional scenario inspired by his experiences of the pandemic.

The film left us in no doubt of the complete failures of society to consider the needs of Deaf people, before and during crises. This was a clear metaphor for the pandemic and the media and politician’s failure to communicate beyond presumed non-disabled and hearing norms. Told largely through his own words, we see how easily life becomes increasingly dangerous in the absence of any warning systems to inform him, in a world where few people have the time, energy, interest, or means to assist him to safety. In Signkid’s words, ‘in a world without access people can’t feel secure.’

Most other contributions were less bleak. Although I never expected to find supermarkets beautiful, Aisle, an animated film with the voice and writing of Ellen Renton and animation by Jess Fig, proved me wrong. This is about the disabling aspects of supermarket shopping in pre-pandemic times, and during lockdown, before she moves on to an exquisite portrayal of her ideal vision. This was a film I was compelled to keep returning to.

Similar themes of disablism can be found in other pieces, often focused on the more mundane exclusions of everyday life. For example, Louder Is Not Clearer, an adaptation from a theatre production, focuses on the experiences of a Deaf man, Jonny (featuring Jonny Cotsen and written by him, Gareth Clark, and Toby Cameron). Jonny finds himself excluded at a dinner party where most of his communication needs are ignored, his capacities underestimated, and so on. Many of the old tropes are wheeled out by Jonny in the service of ridiculing the assumptions made by non-D/deaf-disabled people.

Like several other stories this was told with a great deal of humour, while dealing with the complexities of Deaf identity and his need to fit within the hearing world. Often communicating with fourth wall-breaking, Fleabag-style asides to the viewer, we quickly become aware of his frustration at the table. His fellow diners fail to notice that his exit from the dinner table is an escape from a conviviality which excludes and irritates him, as he makes an early exit to go to the shop for more beer.

His getaway provides a segue where we are transported into several other aspects of his life. These include his frustrating, yet liberating, experiences of dancing at a club, his inappropriate behaviour when working in a shop, his ‘superpower’ of lip-reading, his sessions with a speech tutor, and his refusal to have sex in the dark. This last point is driven home with the use of comedy. He has several thwarted, and slightly angry, attempts to tell the audience that ’sex in the dark is scary.’

Here, as in other contributions which emphasised disablement, or the experiences of impairment, (e.g. Hen Party, Leonie, Silent World, How to Thrive in 2050, and Complexity of Skin) the narrative was framed in ways which were positioned to enlighten a less-informed audience about disabled people’s experiences. Despite any intentions to contribute to greater awareness, these were rarely preachy, and most provided entertaining material for a disabled audience; standouts for me were Hen Night, Earth Calling Alice, and Louder is Not Clearer.

This idea of Deaf or disabled ‘superpowers’ is invoked directly twice within the collection. In Face It: Leonie, one of a pair of monologues written and directed by Miranda Walker, Leonie (played by Crystal Marshall), mentions her extraordinary listening powers, referring to her capacity to overhear the conversations of others. The power perhaps implies that the stigma she has had to endure since the acquisition of facial changes, has made her acutely aware of the attitudes of onlookers, hushed comments and much worse.

As might be expected of a collection which has grown efforts to hear disabled people’s voices, neither of these mentions of this old trope of special powers support the disablist fictions of magical sensory skills so often used by the media to disempower, enfreak, or blame us for our perceived deficits. Rather they seem to work as tongue-in-cheek references to what is expected of us. As the title suggests, both of Walker’s monologues explore women’s relationships with their faces, and both are rooted in the Covid-19 world. Leonie’s relationship with her mask is an intriguing one, as it allows her to ‘pass’ as her former self, and to ruminate on this urge.

The other Face It monologue was Abbey (played by Abigail Crittenden). This time, the focus was on ageism. This had a particularly strong personal appeal to me in the sense that issues related to the pandemic were overlaid with actual or potential employment problems, a concern which affected many, particularly hitting disabled people and those at both ends of the employment age range.  However, Abbey’s monologue plunged us straight into her pain about her worth as an older woman, rather than any financial or health fears; moreover, there were several signifiers that she lived a rather middle-class, and quite bitter, existence.

Like Leonie, this monologue was funny, and focused on preoccupations with her own face – possibly reflecting the obsessions of most of us who had to, or were able to, stay at home during lockdowns. But it also seemed quite symbolic of the ways the pandemic pushed many of us into thinking through our relationships to the present, the past, and our potential futures.

All the monologues in this collection were outstanding, and most involved disabled women. Vici Wreford-Sinnott’s Hen Night made the telling of a story of disablement look deceptively simple. Not only does Hen Night deliver in terms of its compelling storytelling, it left me wanting more episodes, having warmed to Jessica Jones (Nicola Chegwin), bride-to be, from the start. We are expertly encouraged to feel her pain, disappointment, and anger at the way she has been treated, particularly through the ways that government (in)actions have eroded her life as she knew it (e.g. the benefits system), but we are equally struck by her capacity for joy and social connection. Like several other stories it blended humour with drama and pain expertly, whilst allowing disabled women the anger or rage we have traditionally been denied by media representations.

Several pieces did not focus specifically on the pandemic. Some emphasised the power of art to change society’s view of us and our view of ourselves. These included How to Thrive in 2050 (by Kai Syng Tan) a fast-moving ‘neuro-tastic,’ ‘explosive collage’/manifesto. The power of art also fuelled Earth To Alice, written, directed by, and featuring Alice McCullough. I was captivated by the embedding of Alice’s story in her local area (Northern Ireland), her own psychiatric experiences, her connections to Van Gogh, her need to practice art, and her struggles to find an untroubled space to so do.

The difficulties of dealing with new mental challenges was one of the most common themes of the pieces which focused on the pandemic. This was especially true of Complexity of Skin and of Pandemic Parenting: Pandemonium, both of which skilfully employed dance in their exegesis of pandemic experiences, the first exploring the desire and discomforts of touch for people who are neurodivergent (written and performed by Krystal S. Lowe and Matthew Gough), and the second illustrating the many frustrations of parenting in lockdown.

Finally, there were two contributions which I thoroughly enjoyed despite the lack of immediate links I could make with the pandemic or impairment or disability themes. These were Professor Andrew Hugill’s Spectrum Sounds experimental compositions, and The Cat, the Mouse and the Sausage (TCTMATS) animation. TCTMATS was narrated by Andy Hamilton and written/adapted from a Brother Grimm’s folk tale by Emily De Dakis and Joel Simon. On second thoughts, I realised that this (dark) fairy tale had three great moral messages at its very core; individualism kills, beware of comparing yourself to others, and, best of all, interdependence makes us all much richer.