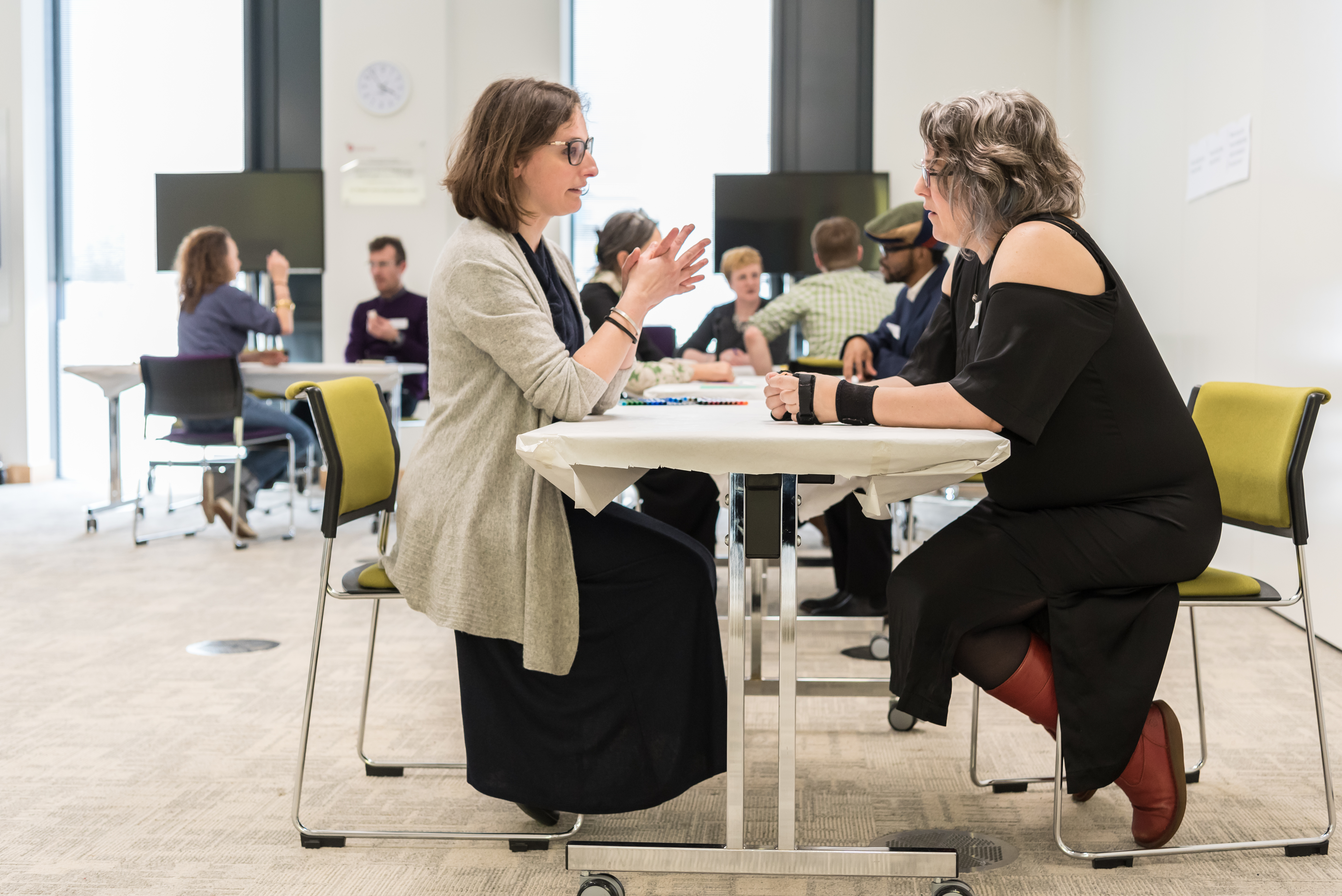 At a recent event, Unlimited convened a panel of arts sector funders to look at access, inclusion and the future – just what else is out there, how accessible is it and what trends are we noticing? The panel included Peter Knott, Area Director (Midlands) of Arts Council England, Helen Killingley of Spirit of 2012, Moira Sinclair of Paul Hamlyn Foundation, Saphia Bishop of Wellcome Trust, Jon Opie of Jerwood Charitable Foundation, and independent producer Shiri Shalmy, and was chaired by Jo Verrent, Senior Producer of Unlimited.

Each funder started by describing their funds, emphasising that all were open to all artists and organisations to apply, including those who identified as disabled. They also spoke about why they funded certain work, which was different for each funder.

Spirit of 2012 is a charitable trust set up after London 2012 to recreate the spirit of pride and positivity that defined the Olympic and Paralympic games. It funds arts and cultural projects, but also those focusing on sports and volunteering, to foster greater community cohesion, empower people, challenge perceptions around disability, and enhance well-being for individuals, communities as a whole, and society, with the strapline “investing in happiness”. They fund the Emerging Artists strand of Unlimited.

Paul Hamlyn Foundation’s mission is to help people overcome a lack of opportunity so they can reach their potential and lead fulfilling lives. They have two nominated funds that support artists: Awards for Artists and the Breakthrough Fund. Individuals can’t apply to those; instead, peers nominate suggested artists (which led to great news for several disabled artists in this year’s Breakthrough Fund decisions). They also have an open funding programme around widening access to and participation in the arts, and another to do with education and learning through the arts, both focused on making sure that people who otherwise don’t engage in the arts have the opportunity to do so.

Wellcome Trust’s mission is to improve the conditions to help people thrive. Whilst the vast majority of Wellcome’s funding supports scientists and researchers, a key component is how they engage the public, and this has often included the arts through their open Public Engagement Fund. This year, they funded a specific Unlimited R&D award – ‘Delicate’, by Jamie Beddard.

Jerwood Charitable Foundation funds projects for the development of early career artists and producers focusing on the breakthrough moment or transition that happens between early- and mid-career. The focus of the Foundation is to support artists to develop their practices and make work of outstanding quality, through funding research and development, commissioning, mentoring and training. They fund around 50 projects a year at any one time in different shapes and sizes, and work with about 500 individuals annually.

Shiri Shalmy is a producer – not a funder – working with artists across different art forms, including a number who have applied successfully for Unlimited. Part of her role is to support artists in identifying funding sources, developing projects that are fundable or that fit into a particular interest of a funder or festival, for example, and then working with the artist to produce and present them.

All the panel were asked if they were proud of their record around disability and diversity, or if they felt they could do better. Everyone felt the latter, and also highlighted some elements of improvement.

Peter spoke about Arts Council England’s Creative Case for Diversity as something which has made a significant difference, the increases in diversity within the National Portfolio, and the need for all staff to take opportunities to try to learn more. He mentioned the opportunities that the new Developing your Creative Practice funding programme presents for artists: “We are on a journey, and people will think ‘well, you should be further along on that journey’, and I’m saying yes we probably should be.”

Helen emphasised that Spirit of 2012 is an outcomes-based funder which places inclusion at the heart of all the projects it funds, and has specific aims about challenging people’s perceptions – and self-perceptions – of disability. They’ve been learning from many projects, taking that learning forward to embed it further in the projects, and evaluating the impact of resultant perception changes.

Moira explained that she’d initially been drawn to Paul Hamlyn Foundation as they had a clear set of values around addressing inequality of opportunity, opening up access, and tackling the systems that create disadvantage in the UK. The Foundation supports the arts because it views them as a force for change in people’s lives and communities: “I think we are not doing a bad job at looking at what the power dynamic is like between venues and audiences, and money and artists … I think our funds are having a really strong impact, and I think they are changing the way that people think about some of these issues.”

Saphia felt there was a lot to learn and improve at Wellcome Trust: “If we can speak about improving health for everyone then it has to be just that, we have to work out those ways we can connect up with everyone … We are trying to be more directive, and bringing people with different voices together to challenge the work we do and the work we fund.”

Jon stated that that Jerwood Charitable Foundation have done it both well and not-so-well at different times. Working directly with artists enables them to be responsive to their needs, shaping the opportunity according not only to artistic needs but also to access needs – a privilege of working with small numbers on high quality projects: “When you make a call for entries, you put a lot of information on the website and that can be quite a barrier. We have been thinking about how to make that easier to digest, access, and how people can approach us. I think the next step is about approaching people who wouldn’t consider applying otherwise; who are completely disillusioned with the funding process.”

Shiri mentioned that she’d rather never hear again the word “diversity” again when it comes to funding – she’d prefer for people working in the arts to consider access and focus on removing barriers, rather than measuring the different people that are engaged. She suggested that perhaps greater success would be gained if we focused on who doesn’t get involved and why, and recognised that many barriers are in our society and outside of the direct remit of funders, but still need removing.

Unlimited has an access fund so that, if our systems create barriers for arts when they apply for our awards, there are funds to support access – an idea initially borrowed from Arts Council England. What else are funders doing to take away those barriers?

The responses included enabling submission through video rather than just written applications, diversifying selection panel members to include disabled people, and putting access information at the front of information to artists rather than burying it at the back.

Other options included balancing the funder’s capacity to deliver against the amount of support provided to artists; there was a general desire to include funds to invest in artist’s professional development in some shape or form (which Unlimited also does) and to offer ‘light touch’ applications where possible, but also one-to-one support if required.

Some funders were also increasing the amount of monitoring and feedback they were engaged in collecting, to find out what works and what doesn’t and so improve what they offer. One individual on the panel called strongly for all funders and applicants to stop reinventing the wheel, and to use partnerships and collaborations which already possess the connections they are looking for, supporting those projects within what they are doing rather than inventing new projects to do what is already being done.

So is arts funding getting harder and harder to gain? The panel agreed that local government funding is shrinking, and that there is more contracting going on rather than grant funding in this area, making it difficult for small companies. The panel also identified a trend towards ‘bid candy’, where artists or projects are involved in consortia but, once the funds are awarded and it comes to the delivery of project, get ‘dumped’ because it’s too complicated, difficult or expensive to deliver that element.

Within the trusts and foundations world, the market has kept up remarkably well so there’s still grant funding available, and whilst National Lottery funding has been reducing, it’s currently on an upward curve so things are looking more positive in that respect. In terms of funding through the Treasury, Arts Council England have been on standstill funding – effectively a cut (in real terms) due to inflation, but the picture could be much worse.

For artists, the sense of competition appears stronger, with artists pitted against each other now more than before – perhaps part of a wider socio-political move. Some panellists saw competition as a good thing, widening the range of artists who might usually get work. It was recognised that there is a growing gap between the amount of funding available and the amount that is needed, due to the increasing costs of living and working, which some funders were responding to by increasing the percentage of their funds going directly to artists.

In terms of projects, there seem to be trends towards an increase in participatory work and an explosion around the boundaries of art form definitions. The increase in work focusing on digital technology was highlighted, as was the amount of work increasing and delivering positive social change. As Moira said, “I think we’re seeing political art coming back in a way we haven’t seen for years and I think it’s heartening. Social transformation is part of the zeitgeist, look at #MeToo, Black Lives Matter, the class debate… Action and artists’ roles in direct action is really very exciting.”

Other areas noted included work referencing mental health, neurodiversity and wellbeing, work on social mobility, and an increase in collaborative working, both across different disciplines and as a form of pulling resources together to deliver something that is in opposition and an alternative to the climate we are in. Measuring some of these elements remains challenging, particularly for outcome-based funders.

All the funders recognised a need to reach out to artists and people who wouldn’t normally participate in the arts or be involved with funding structures. Shifting the established structures is one solution, and finding ways to reach beyond them is another, both of which have merit. For artists, the call was simple: to really think about the work you want to achieve and the impact you want it to have before you come up with an application.

Be There at the Start