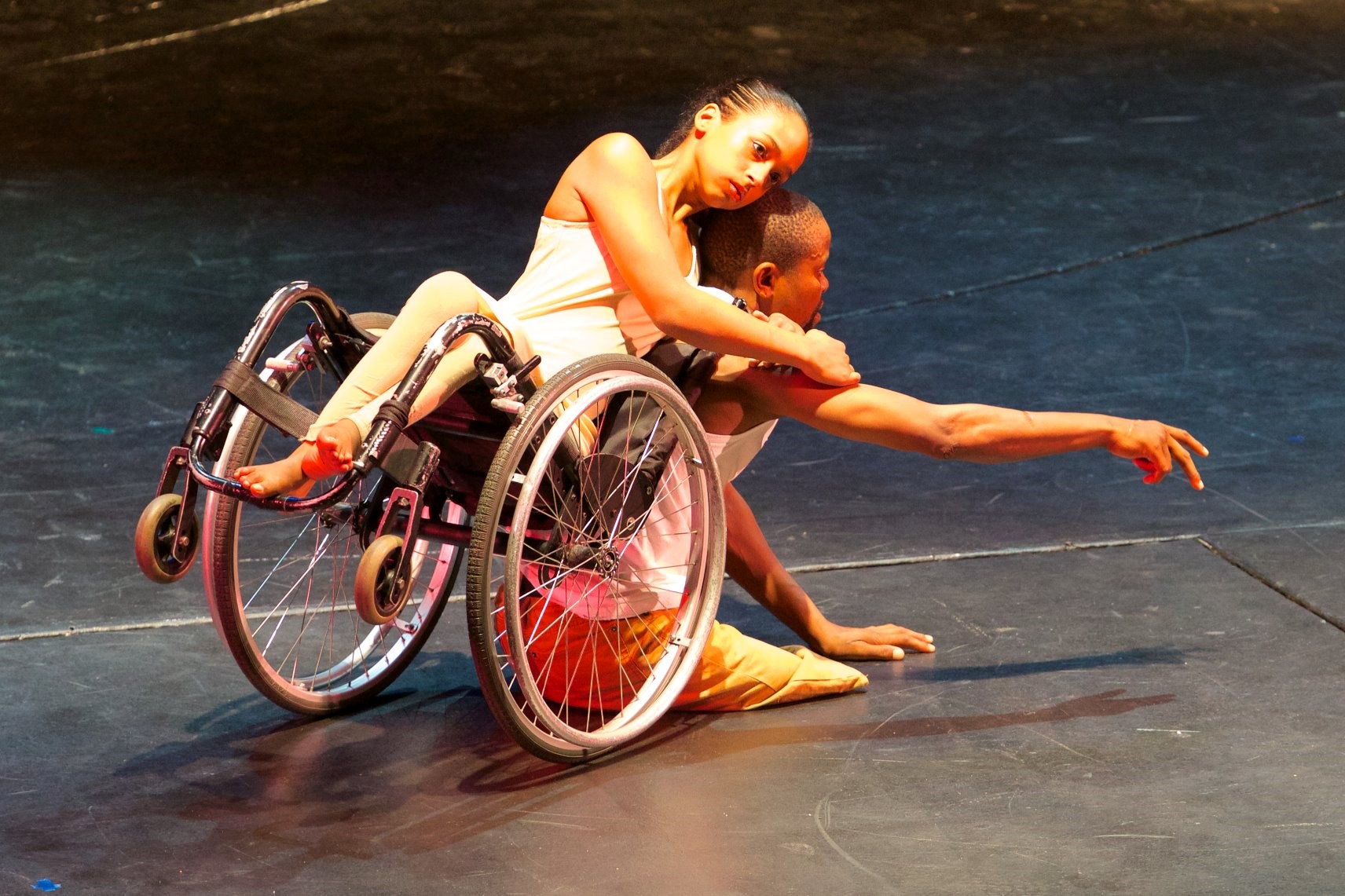 “Equal access for all is a dream, as the world is still a disabling place, particularly for women, poor, along racial lines especially for people of colour, and persons with disabilities. While disability is diverse and each disability is unique in itself, persons with disability yearn for the individual freedoms enjoyed by most other members of society.” Marlene Le Roux, CEO of  Artscape Theatre Centre, Cape Town and panellist for the Equality session at Unlimited: The Symposium reflects on the impact of Unlimited within South Africa in a three part blog.

(From Unlimited: please note that the language used to describe disabled people in South Africa is different to the UK; the author’s preferred language has been kept throughout this article).

“There is no greater disability in society than the inability to see a person as more.”

The arts are an evolving medium for community expression that is continuously impacted by, and in turn, impacts the local culture. It brings to light the creative impulse of the community through a series of forms, including the performing arts, literature, media arts and visual arts. Many of these art forms are combined with others, providing a more complex set of offerings to the public.

One vehicle through which people with disabilities can further enrich themselves are through cultural and arts events. Contact with the arts has been found to facilitate social and economic inclusion and trigger the empowerment of these youth.

This article will reflect on the way the Unlimited arts commissioning programme has assisted the Artscape Theatre Centre in Cape Town to enhance the work of disabled artists to reach more and new audiences and in the process shift perceptions around disability and persons living with disabilities. It will focus on my own relationship within the arts sector as well as on the changing intersections between disability and arts (especially from a South African context). Finally it will also address the attitudinal and working changes that the Artscape Theatre Centre has experienced as a result of collaborations with the Unlimited programme.

I come from humble beginnings, the product of a poor, but loving and caring family in Wellington, a rural town in the Western Cape. I experienced discrimination not only as a Black woman living in a rural area, but also as a person with disabilities that succeeded in life in large part because of my family and my will to learn and improve my understanding of people and the arts.

For example, when considering university in the 1980s, I enthusiastically sent an application to the music faculty at the University of Cape Town to be an opera singer, only to be turned down due to my impairment. Despite this setback, I continued fighting for other causes along the way and have tried to give back to the community, mentoring young people from all walks of life and encouraging them to pursue their dreams.

I am inspired by the work of Sonali Shah, who as a British Indian professional disabled woman has been doing qualitative research with young disabled people in an educational context. Critically, she has concurred with O’Kane (2000) who views young people as “active social agents, able to articulate their own experiences and express their views” (Shah, 2006, p. 208). This is also my experience in working with young disabled people in a performative context like Artscape.

Shah refers to a study by the United Kingdom’s Disability Rights Commission (DRC) that found that young people with disabilities have not been given the same educational opportunities as their non-disabled peers and neither has it been expected from them to achieve the same goals. Once again this also reflects my experience with young disabled people in performance art. Shah (2006) then focuses on how to create new opportunities where young people with disabilities can be given a voice, with the aim that they could influence policy and further research. This is also one of the goals of the Universal Access and Design Task Team at the Artscape Theatre Centre as well as the Unlimited programme.

As the Chief Executive Officer (CEO) of Artscape, I am especially concerned with youth that strive for the opportunity to engage with society. As an experienced professional working in the arts and an advocate for the rights of all, I have contemplated a more participatory society, where all sectors can fully enjoy and learn from the arts, regardless of personal income, social status or ethnic group.

Being disabled myself, and passionate about the arts and culture, I feel that it is important to hear from disabled youth concerning their views on the performing arts and how it could facilitate social and economic inclusion.

The Changing Intersections between Disability and the Arts

Intersectionality is used to conceptualise the relation between the system of oppression in our society that constructs multiple identities, and social location in hierarchies of power and privilege. It recognises multiple forms of discrimination and interlocking systems of oppression. It originated in the writings of the feminist Crenshaw and it provides us with a tool to acknowledge “the multiple identities of an individual and how these result in various experiences of disadvantage or advantage” (Moodley & Graham, 2015, p. 25).

Intersectionality theories enable us to better understand the mutual processes of how people are marginalised and excluded, especially pertaining to poverty and disability. A greater understanding of the complexities of intersectionality and its multiple forms can prove to be an empowering tool in our quest to eliminate historic barriers. The complexity of multiple identities is also recognised by capturing and accounting for experiential and social structures that are in constant interaction.   (Yuval-Davis, 2006, p. 65).

South Africa has approximately three million persons living with disabilities, equating to about 7.5% of the country’s population, defined as individuals with a sensory, mental or physical disability (Stats SA, 2011).

In their research, Moodley and Graham (2015) indicate how, in the South African context, disability intersects with gender, age and race. This impacts negatively on education, employment and income for all people with disabilities, but more so on Black women with disabilities. Reliable data on disability and how it intersects with race, gender and poverty have been limited and overlooked. They compared empirical data on how the intersectionality between disability and gender affected outcomes in the areas of education, income and employment by comparing it with data of people without disabilities and looked into the role that race plays. They cite the World Health Organization (WHO) that in 2011 stated that “Disability may increase the risk of poverty, and poverty may increase the risk of disability” (Moodley & Graham, 2015, p. 25). This implies that people with disabilities are less likely to have a formal education, and more likely to be unemployed.

In South Africa, there were deep divisions along racial and gender lines under Apartheid. The acceptance of people with disabilities is an ever-changing and ever-evolving process in all societies. Historically, people with disabilities have been excluded from most meaningful activities in society, including access to education, health and economic opportunities (Albert & Hurst, 2004).

People with disabilities are dealt with according to the models that exist, without considering their personalities, rights to self-determination and ultimately, their desire to be empowered in life. Models, such as the “medical model” and “charity model” generally view the disabled person as a powerless victim of nature that can only progress in life through the constant supervision and aid of others. Disabilities are most often seen as medical defects that must be cured by doctors, a restrictive approach often referred to as the “medical model”. In most societies, people with disabilities are an oppressed minority, and are often seen as having a negative effect on society (Dossa, 2008).

In the case of the medical model, efforts concentrate primarily on physical rehabilitation and stability, empowering doctors and medical staff to determine whether the person with the disability needs to be cared for and to what degree. This model focuses on the physical health of this person, while disregarding her/his intellectual integrity and desire to be an equal partner in any community. Furthermore, the present inability of many people with disabilities to participate widely in society is seen as a given and a direct result of having an impairment, and not as the result of features of our society which can be changed (Moyne, 2012).

Similarly, the “charity model” (also referred to as the “tragedy model”) depicts disabled persons as “victims of circumstance who are deserving of pity” and require assistance (Langtry, 2010). This model maintains that medical institutions providing services to people with disabilities need assistance on an ongoing basis and that charity-based funding will satisfy all needs. These institutions often employ “televisual” images of disabled children to raise funds for their organisations, however, many activists find these monetary campaigns patronising and oppressive to disabled people (Donnellan, 1992; Oliver, 1990). The intent of these campaigns is not to empower people with disabilities, but to tie them to institutionally-based commitments.

The social model of disability offers an alternative approach to the medical and charity models of disability, identifying societal barriers and the recurring exclusion of people with disabilities from mainstream activities. Importantly, it identifies an important distinction between “impairment” and “disability”, which are often used interchangeably by authorities and policymakers (Moyne, 2012). The social model effectively establishes that society is the problem and that inadequate education and limited access to facilities and services (public services largely controlled by society) are what marginalise people with disabilities (Oliver & Sapey, 2006).

In contrast, disability activists have more recently developed and encouraged the widespread use of alternative models, such as the “social model” or the “rights-based model”, which effectively illustrate how people with disabilities, who represent a very diverse set of communities, are largely ignored and prevented from constructing their own lives. In most cases, particularly in disadvantaged communities in the developing world, their fates are defined by others, as they are widely seen as a homogeneous community, incapable of “going it” alone. Historically, this ignorance on the part of the able-bodied has adversely impacted the way in which people with disabilities think of themselves. Many “internalise this negative message that all disabled people’s problems stem from not having ‘normal’ bodies” that conform to a standard image (Moyne, 2012). Because of this intersectionality of social identities and oppression, a lack of access to mainstream activities and opportunities remains a day-to-day reality for many persons with disabilities (Le Roux, 2015). Persons with disability yearn for the individual freedoms enjoyed by most other members of society.

Unlimited: The Symposium – Equality: Disability, Intersectional Identities and the Arts

Unlimited: The Symposium – Choosing a Topic for the Equality Session