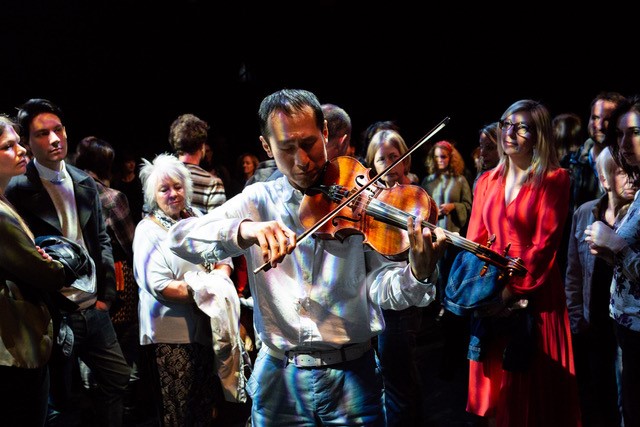 The British Paraorchestra, The Nature of Why. Photo by Paul Blakemore.

Unlimited is hosting a symposium on 4 and 5 September 2018 at the Unicorn Theatre, London to discuss the key issues, challenges and opportunities in and surrounding disability-led arts in the 21st century, which will lead into Southbank Centre’s Unlimited Festival (running from 5 to 9 September).

The Symposium will be split into four sections – ‘Art’, ‘Equality’, ‘Attitude’, and ‘Future’ – each led by a prompt, as selected by you. Today, the Chair for the ‘Equality section, Sonya Dyer, introduces its panel, who’ll be discussing ‘Disability, Intersectional Identities and the Arts’.

The term ‘intersectionality’ is increasingly used as a way of describing the convergence of various systems of structural oppression people who are marginalised within society experience.

For example, a working class, woman of Asian descent might simultaneously experience oppression or discrimination due to her gender, ethnic heritage and / or class. Essentially it recognises that none of us are just from one social category or another, but instead carry a multiplicity of identities that intersect.

Originally, intersectionality was a way of specifically articulating the complexities of Black women’s experiences in ‘Western’ societies. It spoke to the reality of being marginalised within ‘mainstream’ feminism and by male-centred Black liberation politics, as well as being largely ignored in academic and activist works on class.

Intersectionality was first popularised by American theorist Kimberlee Crenshaw in 1989, building on the work of the Combahee Women’s Collective in the 1970’s in Boston, Massachusetts (which also crucially incorporated sexuality into the mix). Arguably an even earlier articulation of this concept is found in Sojourner Truth’s famous ‘Aint I A Woman’ speech in 1851.

Many other theorists and writers have since developed the concept including Patricia Hill Collins (see her Matrix of Oppression), bell hooks, Gloria Anzaldúa and Cherríe Moraga.

Today, intersectionality has become popularised by more populist or even capitalist representations of feminism; Beyoncé uses the term as part of her stage set (using the words of Chimamanda Ngozi Adichie).

Despite its radical legacy, I can’t help but wonder whether intersectionality has become – like terms such as ‘self care’ and ‘cultural appropriation’ – somehow de-radicalised, misunderstood, or indeed, if it often finds itself misapplied?

Crucially for our forthcoming discussion at the Unlimited: The Symposium, how is the term being used within discourses around disability as a diverse lived experience, and within the disability-led arts sector in particular?

What kind of identify formation does it make space for?

What kinds of solidarities become possible if intersectionality becomes even more a part of discourses around disability?

Or is it just another once radical term that has been usurped by the forces of bureaucracy as a way to constrict and codify people?

It is also true, of course, that some artists prefer not to emphasise their ‘disability’ (much in the same way that some artists would rather not be primarily identified in terms of their race or gender). But for many artists and other practitioners, identity forms an integral part of their self-representation and is key to understanding their work.

Debating incorporating disability into our understanding of intersectionality more strongly, therefore, has a feeling of urgency about it. What is the point of using the term, if it doesn’t include everyone who is – or has the potential to be, by virtue of being themselves – disadvantaged in society? Is there resistance on the part of those who would not necessarily see themselves within the frame of the much-derided term ‘identity politics’ – for example, the ubiquitous white, middle class male? Or does intersectionality lose its radical promise if people who are privileged by other social categorisations they fall into also adopt it?

At Unlimited: The Symposium, our discussion is sure to be provocative, featuring an international panel of artists and producers from diverse fields of practice:

Marlene Le Roux is CEO of Artscape Theatre in Cape Town, South Africa and an independent artist and activist.

Michael Turinsky is an Austrian choreographer, dancer and theoretician.

With panellists from such different parts of the world – and points of view – our hope is that this discussion opens up the conversation surrounding disability, intersectionality, group politics and individual identity within the arts.

The aim is to proceed firmly in the belief there is no right or wrong way to discuss these issues – and no need to move towards a notion of consensus that shuts out alternate voices.

It’s an exciting time to challenge each other and ourselves by opening out the possibilities of what interconnected histories of resistance, organisation and community building might teach us today, and help us build for the future.

In any case, it’s going to be a lively one.

Sonya Dyer is an artist, writer and occasional curator from London.

Unlimited: The Symposium – Choosing a Topic for the Equality Session