Graphic note-taking of this event was done by Roberto Sitta from Creative Connection.

Earlier this month, Unlimited Connects visited Scotland to unravel the barriers facing Scottish disabled artists as well as to celebrate some of their brilliant work. Ben Lunn tells us more…

Since I first accepted I was disabled, I’ve spent days talking with and listening to fellow disabled artists. They tend to be truly thought provoking and fascinating days of discussion. Unlimited Connects is no exception to this and, in short, it was a joy to be invited to attend the Scottish iteration.

The very start focused on ‘Pitch and Mix’ sessions in which four artists presented their ideas, areas of focus, and shared what drives them as creatives. Emily Beaney presented ‘Deviant’ first – a multi-sensory project which experiments with varieties of film, making particular use of 16mm film. Clara Weale followed this with ‘The Scent of Insulin,’ which offers an in-depth and curious discussion about the history and evolution of insulin, highlighting the continuing problems with access to it.

Ellen Renton introduced her project, ‘And Who’s She When She’s At Home?’ a loving and heartfelt reflection on the artist’s experiences, delving into a variety of issues facing disabled people in the East of Scotland as well as exploring working class history. Finally, Lilith Cooper discussed their work focused on zines and their role as an artist being a way of sharing knowledge as part of activism.

As ever with ‘disability arts’ conversations, given the breadth and diversity of topics we are interested in and experiences we have to share (remember: disabled people are not a monolith!), the discussions of the day were expansive. I am always enthused to see that disability arts are growing to a point where any expectations and preconceptions about what an event like this might involve and generate are quickly torn up. The artists alone spanned communications with distant family in the Kingdom of Fife (Ellen Renton) to considerations around the necessity of luxury and its impact on others (Clara Weale).

I was unable to attend Lilith’s workshop, simply needing to mentally rest, however Rachel Walker (Artist Support, Unlimited) had this to say about the experience:

‘Lilith Cooper’s zine-making workshop was creative, informative, and eye-opening all at once. Being someone who was, until the event, relatively new to the concept, I appreciated the gentle introduction which Lilith provided. Zines are DIY, self-published, and handmade booklets, pamphlets, or magazines, I learned. With zines, Lilith explained, you’re in control.

‘That means that, unlike a book, you’re not answering to publishers or booksellers, to profit. It also means that, unlike with much social media, you can limit distribution: you can give copies to only friends, family, or people in your community. It’s still ‘out in the world’, but you don’t get likes or comments on a zine. There’s no immediate feedback. You can be anonymous if you want.’

It struck me, that the zine is a rather unique form of media. The making of one requires personalised input – much like a social media post – but, unlike Instagram, etc, more time investment is required on both the creator and the consumer’s side. Could an increase in the popularity of the zine medium indicate a desire for a shift away from the fast-paced, screen-based platforms which currently dominate? I pondered this as I followed Lilith’s step by step instructions for making my own physical, and then digital, zine.

Indeed, as Lilith told us – ‘you don’t just write a zine, but you bring it together, print it, distribute it.’ It’s a not-for-profit labour of love, or perhaps of necessity; a medium which, as Lilith explained, can often be found ‘subverting, repurposing or critiquing’ mainstream media. I found Lilith’s descriptions of zines – their ability to empower, their perfect imperfections, their allowances for multiplicity – refreshing and thought-provoking to say the least. I’d highly recommend heading to Lilith’s commission page to read more about their current commission – ‘Take It Back’.’ 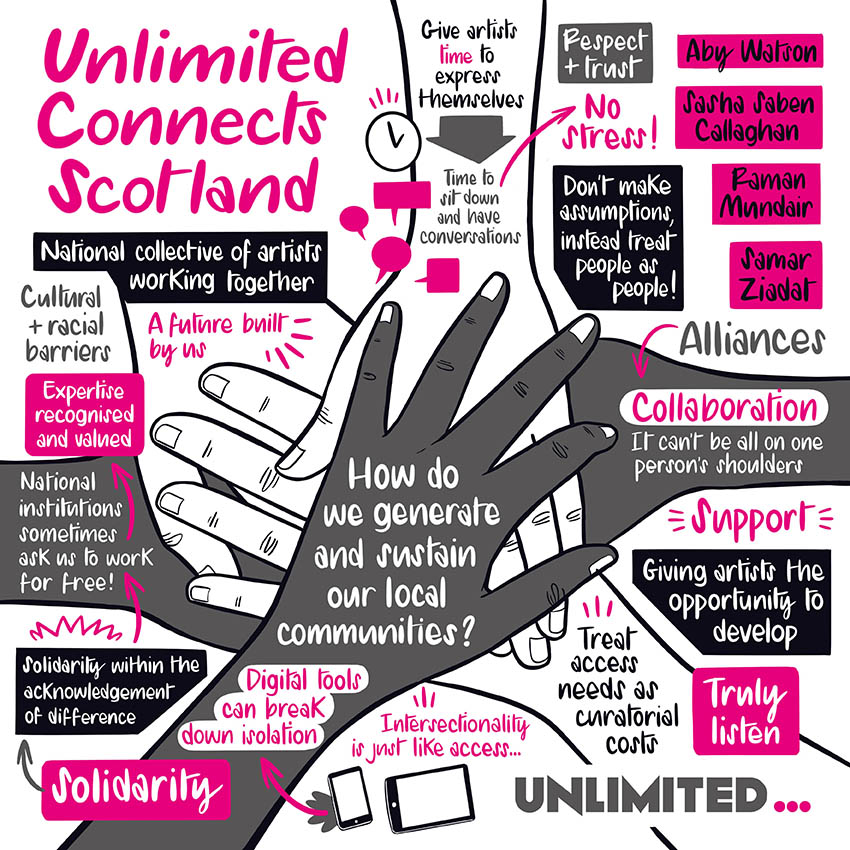 The panel discussion in the afternoon focused on community, an important and timely discussion. Aby Watson, Raman Mundair, Samar Ziadat, and Sasha Saben Callaghan were all panellists.

We began by discussing the role of community in aiding those struggling to overcome and remove barriers in the arts, which brought up some interesting reflections. We also considered the role of intersectionality in these conversations, which Raman Mundair argued could help create dialogue between marginalised groups. Interestingly, the role of others outside of the community in barrier removal was also explored.

Aby Watson opened by raising the lack of such discussions in Scotland, highlighting how everything prior to setting up the network (The Scottish Neurodiverse Performance Network) was severely lacking; contributing to the necessity to make it happen.

Sasha Saben Callaghan shared experiences of developing ‘Not Going Back to Normal,’ a scheme created during the height of the pandemic, which invited contributions from various disabled artists across Scotland to share their thoughts on the current paradigm we are in. All selected submissions can be found at the following the  link. It is filled with images, short poems, manifestos, and ‘calls to arms’ and makes a thoroughly fascinating read for anyone who takes the time to do so.

I was fascinated to see common themes emerge: questions of time and pushing past barriers. It’s hard not to find their recurrence saddening, knowing that access to the arts has been very slow to improve in recent years. From my perspective, I am concerned that more needs to be done to meet the demands that we decide upon when we have conversations like today’s. I fear, what Mark Fisher raised in his writing Capitalism Realism, that co-option of our experience, that they might appease us with small wins but fail to make structural change – leaving us solely with pithy mottos, and empty gestures. Thankfully Scotland Connects demonstrated that there is still a lot of fight in disabled people, even if the forces around us wish to act otherwise.

I know that we have a long way to go and also that there is enthusiasm for change. Connects left me optimistic that this change is desperately fought for and yearned for. I am also grateful to see – through such wonderful works – that the arts are growing in Scotland. I implore people to maintain this energy and see this fertile field being cared for, allowing for our communities to grow stronger and on solid foundations.

Lilith Cooper – Take It Back