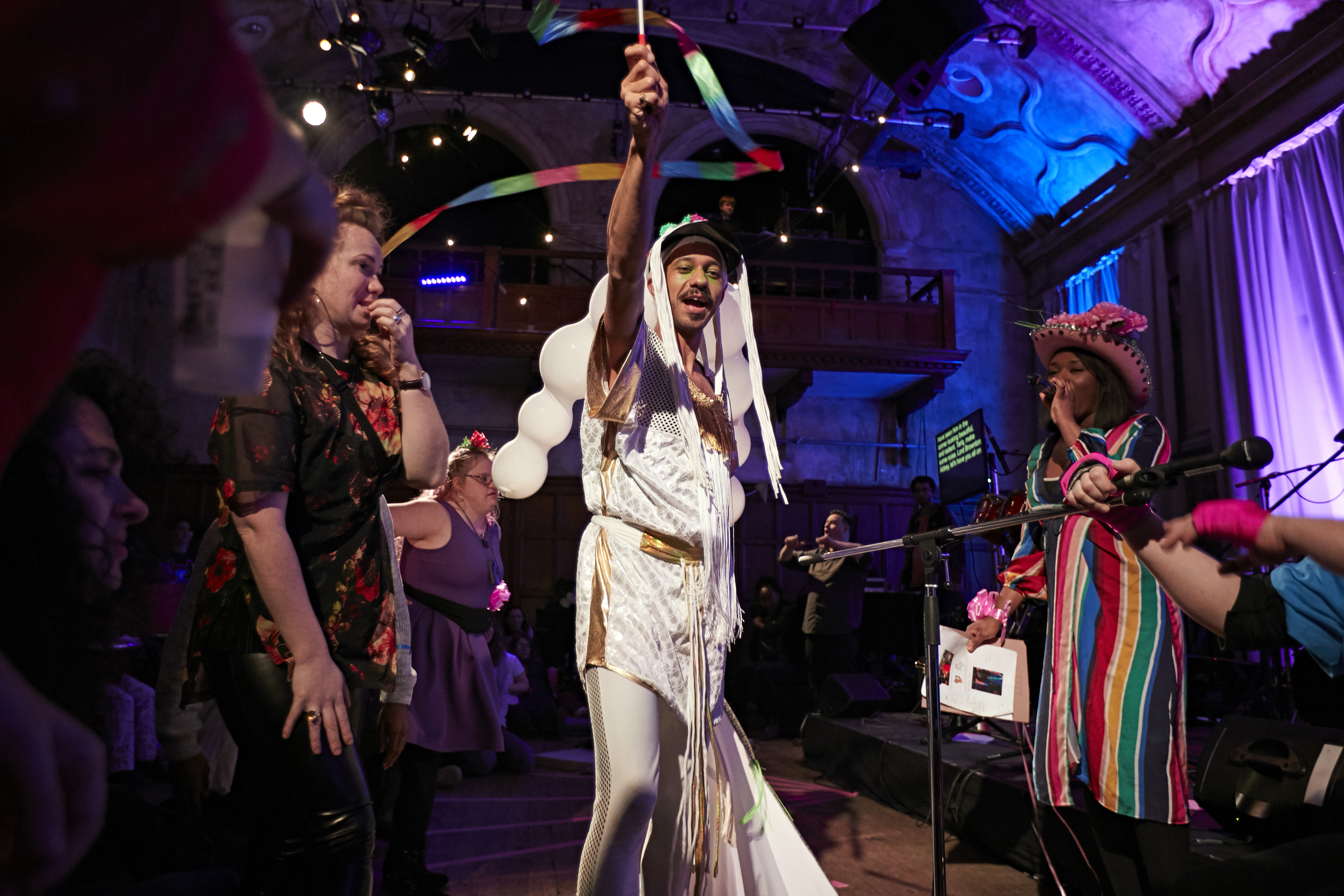 Artist, Tarik Elmoutawakil at the Festival of Rest and Resistance. Photo by James Lyndsay

Sarah Thewlis, Unlimited Trainee, gives us her thoughts on having experienced a rest-themed festival, and the recent installation of a workplace resting space.

I write this from the comfort of our office’s Rest Space at Artsadmin’s Toynbee Studios, a recent addition which has by now been baptised by many a mid-afternoon nap. I come here now and again, to ease the flare-ups and fatigue that accompany chronic pain, and sometimes (despite what it says on the door) to work. Away from bright screens and office lights, I draft my tweets and blogs on paper like some kind of ancient scribe-cum-influencer #SoLastMillennium.

Having somewhere like this is so helpful, though it did at first seem extravagant to ask for it. Now in place, complete with a placard indicating its availability, it is a joy not only to use it myself, but to pass by and notice anytime anyone else has got it set to ‘Resting in Progress’.

Having access needs can feel sometimes like demanding weird and niche requirements – at its most internalised I’m Mariah Carey, with the dressing room, rider, blue M&M’s. Yet there’s an evident need of a space like this. Its universal appeal and its normalisation of self-care is a testament to how making locations better for disabled people makes them better for everyone – one of many adjustments that are not only reasonable but actively desirable.

My takeaway is one of not being alone or exceptional or weak in needing a Rest Space. Everyone needs them though it may fall to disabled voices to lobby for them. Our ethos of making spaces physically more inclusive has a lot to teach wider culture.

“Access is an asset”, in this and many other ways. It’s a phrase that has stuck with me throughout my time at Unlimited so far. I first heard it in the context of Touretteshero’s Festival of Rest and Resistance at Battersea Arts Centre earlier this year, where examples of its truthfulness were everywhere. With a programme of entirely relaxed performances, people came and went, expressed themselves, brought whoever or whatever they wanted to bring, in a way that was access-driven but wide-reaching in its beneficial effects. This was made even clearer in audience discussions: a disabled reviewer expressed how, in this case, it was being able to have her partner and baby in tow that made the difference between being there to do her job or not. A disabled audience-member stated that this was the first time in twelve years they had felt safe and welcome enough to enter a theatre space at all. This brought home another way that “access is an asset”, in that had this event not been accessible to this audience we would have been denied the enrichment of hearing each other’s contributions.

With beds and soft things abounding in the Battersea Arts Centre that week, it took on the feel of an alternate universe where the norms of how and when to occupy space ceased to take effect. Walking through the door you were instantly met by the sight of artist Brian Lobel durationally binge-watching TV from atop a bright pink mattress. I also had the privilege of watching the vacuum cleaners’  ‘Mental’, a mesmeric one-man show told from within the confines of his duvet. Most exciting to my burgeoning identity as a rest space connoisseur was the one that has been commissioned from Rhiannon Armstrong, which is now a permanent fixture at the BAC. Having a space set aside, that is purpose-built, not just consulted upon but made by a disabled person, is a refreshing dismissal to the constant suspicion that access is an afterthought.

One of my access tools is a pair of green-tinted glasses – not clinical enough to seem like they’re not an aesthetic choice, but not fashionable enough to look like a good one. As a photosensitive person then, it was so exciting to me to find the switch to change the colour of the resting room’s lighting, within reach even when lying down. An earlier talk from Jess Thom had reframed access as the reduction of ‘faff’, and the facilitation of situations where it’s not the end of the world if a disabled person forgets their own access equipment. An anecdote about the panic surrounding leaving ear defenders at home, but finding them provided by the venue struck a chord, especially on a day where, having forgotten my glasses, I found I could still make a whole room green.

Another high (though literally low) light were the BACs’ Rest Space’s soft-furnishings, emblazoned everywhere with a pattern of stick-figures lying horizontally on their sides. Where so often being upright is prescribed by convention, logistics and awkwardly-placed arm-rests, here was an invitation from the cushions themselves to place yourself down on the ground and join them. Seeing that same insignia on cushions and mats strewn across the closing party’s dancefloor created and environment where it didn’t seem at all weird (though still maybe kind of niche) to sit cross-legged in between revellers and someone’s very excited baby as Tarik Elmoutawakil’s iridescent jellyfish balloons rained down from above to the sound of Electric Fire’s neon-future-funk set.

One of the other phrases that has really stuck with me from the festival was a line in one of the 30 verbatim accounts that made up Raquel Meseguer’s scratch performance, compiling attempts to rest in public: the sentiment was an upsetting one of having to rush home in pain as a result of “being abroad in the world too long”. By the end of that week at the BAC though, it felt like we had grown to become our own country: a republic of rest that still retained some of the safety of home – a universe I’d want to see expand until nowhere felt so abroad anymore.

Experiencing diversity through impressions on the everyday: the radical vision of Unlimited artists

Changing the world from a pink bean-bag: My time at Unlimited