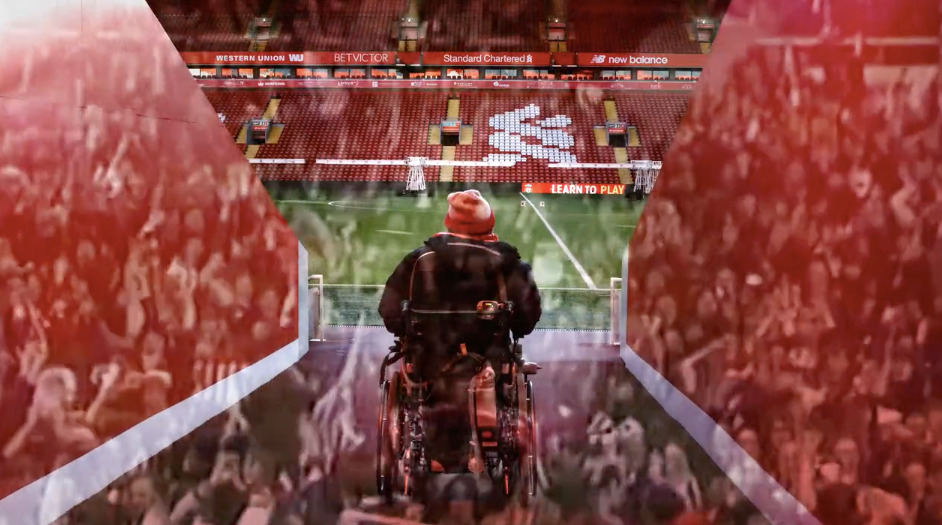 Sadly, we have just heard that the twice Unlimited-commissioned poet, Owen Lowery, passed in May 2021. Jo Verrent reflects on his work and impact for Unlimited.

I first met Owen when he was considering applying for Unlimited and wanted a chat. He didn’t know if we supported literature (we do), he didn’t know if he ‘counted’ as the type of artist we wanted to support as his work didn’t focus one hundred per cent on disability (of course he counted), and he wondered if he was ‘too disabled’ to speak his own words on tour – would he reach an audience? As well as being an incredible poet, Owen was warm, kind, and funny and audiences warmed to him and his signature slow paced and ventilator-enabled delivery quickly, the pauses giving literal breath to his words.

His work was not only brilliant, but so widely drawn it had immense appeal to so many people. Football, art, relationships, nature, and of course, disability: his work shone his razor-like gaze on myriad topics.

Unlimited supported his development to take Otherwise Unchanged off the page and into readings (the publication is still available from Carcanet Press). As they say:

“The poems in Owen Lowery’s first collection speak in a range of voices, offer glimpses into many lives and many worlds. At the same time, we hear in all of them Lowery’s own voice. Incorporating elements from English, Welsh, Hebrew, Arabic, Japanese, and Italian poetic traditions, he develops form deftly, giving his work a beautiful, risky movement and musicality. Many of his poems pay tribute to poets writing in the face of war: he enters the worlds of Paul Celan, Keith Douglas, Alun Lewis, Edward Thomas, and – in a powerful sequence based on If This Is a Man – Primo Levi. Other poems are more directly personal, the poet’s confessions both wry and tender.”

Owen Lowery himself, speaks about this collection and the inspiration for, it in this 2 minutes with interview from 2014.

We also supported a second project, Transitions, which was performed across the UK – from Bangor to Bury, from Dumfries and Galloway to the Norfolk and Norwich Festival.

It exists not only as a poetry project, but also as a film, made in collaboration with LA Productions. From the outset, Lowery intended Transitions to be a multi-media experience, based on the poems on which the idea was first developed.

Please join us in celebrating the life of Owen Lowery and take a few minutes out of your day to watch his words come alive read by Owen Lowery himself and a cast including Ricky Tomlinson, Sue Johnston, Sam Holland, Barbara Dickson, and more.

You took the words right out of my mouth…