Unlimited connects Scotland event took place last week looking at the topic ‘Community focus: Scotland. How do we generate and sustain our local communities? Perspectives from Scottish artists and organisers,’. However, with COP26 ending, freelance artist, writer, and former Unlimited trainee, Alistair Gentry reflects back on our North Connects event which was focused on the Climate Emergency.

The latest in Unlimited’s Connects series of events continued in late October with this North edition. Everyone at Unlimited knows, by the way, that the north isn’t a monolithic, monocultural thing… The name is mainly based on the Arts Council’s funding regions! These also, to my mild annoyance as somebody from Suffolk, include East Anglia in the South East even though they don’t geographically touch each other because London (also a region) is in between them. Not to mention that Suffolk and Surrey are extremely different even though probably 50% of the time when I tell people where I’m from I have to explain that I don’t mean Surrey. In short, I feel those bristles that people in “the North” feel about seemingly being homogenised. But anyway north as a direction actually is appropriate to mention here because that’s the one Unlimited will shortly be moving in.

After being hosted for many years as a funding programme in the offices of its delivery partners Shape Arts in South London and Artsadmin in East London, thanks to support from an Arts Council National Lottery Project Grant of £750,000 for 2021-2023, Unlimited will transition to an independent organisation and continue exploring partnerships and planning delivering our work with disabled artist; and the new headquarters will be in Wakefield, West Yorkshire.

After briefly celebrating this milestone, the afternoon event proper kicked off with a panel discussion about disabled artists and climate justice, followed by pitches from artists working on environmental projects and opportunities to discuss or ask questions. The panel on climate change and disabled artists was chaired by Nickie Miles-Wildin, Co-Artistic Director and CEO of DaDaFest and featured Executive Producer of Leeds 2023 Emma Beverley, director and creative producer Hassun El-Zafar, and artist Cheryl Beer. Cheryl and Hassun are two of the artists selected by Unlimited during the most recent open call for applications for R&D and commission funding.

Hassun related his own hearing loss to an increased awareness of how biodiversity is reflected in the sounds (or loss of sounds) in nature, and how bad we are as humans at noticing both types of change when they’re usually so gradual and incremental. Despite this, the end results can be life-changing for us and catastrophic for nature when they reach the tipping point where we finally become conscious of them. His sound and video works collected under the title of Hear focuses on the experiences and lifestyles of real people and the sounds of their natural environments among the coastal mangroves of the United Arab Emirates, the rainforests of Borneo, and the woodlands of Britain.

Cheryl’s work Cân y Coed (Song of the Trees)  is also being researched and made in the rainforest, but in her case it’s the four small, disconnected remnants of one formerly continuous, vast primeval temperate rainforest in Wales that dates back at least ten thousand years. She said that many people even in Wales don’t know these exist and are surprised to discover they have a local rainforest. When we hear about “the rainforests” most of us tend to think about hot places like South America, but rainforest habitats worldwide are also in jeopardy– including cool ones in places like Tasmania or the ones that used to be abundant in the British Isles. It’s unintentionally symbolic that two of these precious remnants are next to nuclear power stations, virtually the antithesis of nature. Again, Cheryl’s own hearing loss made her acutely aware of what she could no longer hear, and in turn of what we’re losing in nature which means that potentially nobody can hear them ever again. She also dealt with her own adjustments and emotional responses to hearing impairment by connecting with nature. She uses hearing aids and she’s now also using related medical hearing testing technology to listen to the trees then translate this into music. Apparently people are still shocked that hearing impaired people work with sound, but she does!

Nickie asked about engaging with everyone, because she suggested that the conversation around climate crisis often feels quite middle class and off-putting to many people. Cheryl Beer observed that reasoning and facts don’t seem to work, beauty doesn’t seem to work, but suggested that emotional engagement is key rather than overt political statements– although we need the political and factual approaches too. Hassun felt that there could be no climate justice without a joined-up approach to social, class and racial justice. At the moment– and probably in the future too– the worst effects of climate change impact people who don’t have social, class and racial justice either. Perhaps we could also think about ways that our community could and should be not only the people around us but also the animals and plants around us, because that’s where we can most effectively make change. Cheryl pointed out that the decision making process around these subjects definitely is middle class because many people don’t necessarily feel they have the skills or the confidence to get involved, but art and artists can help with that too. Hassun agreed, saying that art and artists can help people to understand that they can get involved and make change, by giving agency to the people most impacted and helping them to engage with the solutions needed as practical things rather than academic matters that go on over their heads.

Emma Beverley gifted us a great mnemonic when she talked about the “triple bottom line”. This is not as saucy as it sounds, it’s a reminder for an organisation to think about their responsibilities equally in relation to people, planet and profit. With some noble exceptions we all know that our current culture tends to prioritise the latter, with the first two often being afterthoughts at best. Emma also mentioned that even when intentions and actions are good, with time and other pressures, and the urgent need for action, communication of what needs to be done or why it’s happening is often bad; the actions taken as a result can be alienating especially when it seems like it’s solving other people’s problems rather than our own problems or the problems of anyone we know. There was also some discussion of reaching varied audiences in general. Connections, opportunities and communities are valuable, but so is having the money to make your work. Without that it’s hard to have the impact you want to or need to. 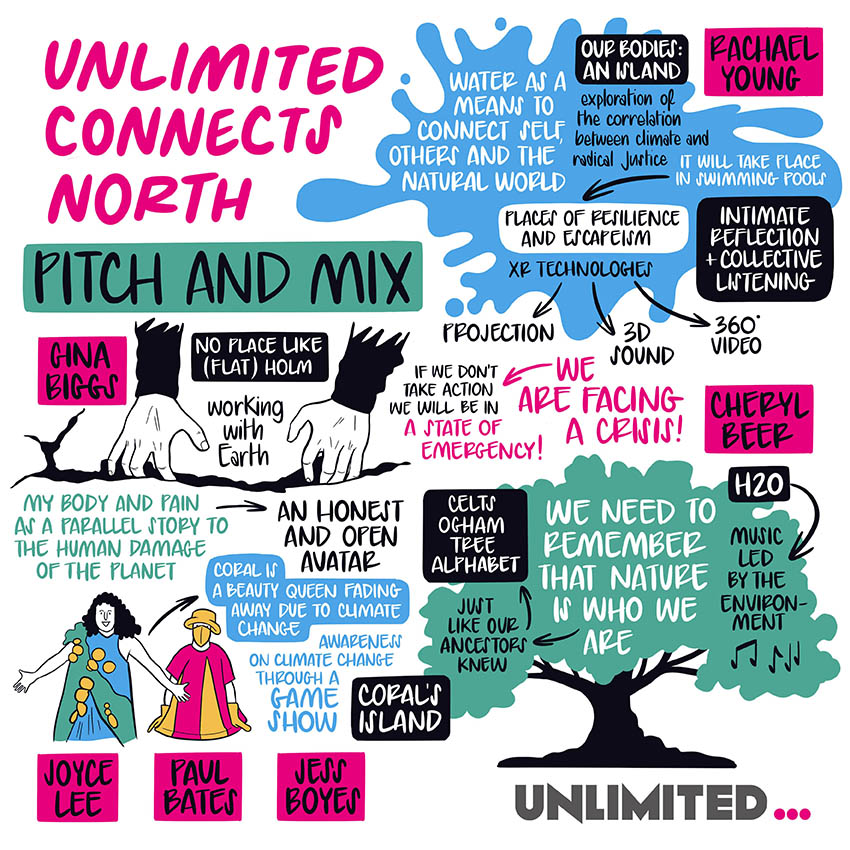 The panel was followed by some pitches from disabled artists for funding, peer or other support, starting with Rachael Young. Their performance installation Our Bodies: An Island, explores racial justice and climate crisis, focusing on water as a uniting subject and environment for participants. Cheryl Beer also returned to present H2O, focused on the water that trees circulate, process and filter for themselves and for every other life form on earth. Cheryl’s work emphasises that we are not separate from nature. Trees and water are vital to us and to the planet. “Nature is not just beautiful,” she said. “It’s who we are, it’s what we are.”

No place like (Flat) Holm by Gina Biggs  is a series of performance films taking place over the course of year, in all weathers and seasons. They draw a comparison between Gina’s own chronic pain and the constant damage being done to the earth by humans. Flat Holm, by the way, is a tiny island in the Bristol Channel and sounds like a fairly bleak and challenging place to be at the best of times! Saved you a web search there. Coral’s Island by Bradford’s learning disability theatre group Mind the Gap Theatre Company  is a live performance work about climate change with game show vibes, drag and hook-a-duck games. As I mentioned when I was live tweeting this event, I’m pretty sure this sentence had never been on Twitter before and I’m equally confident it’s never been on the Unlimited site before either although there are already plenty of other world-first combinations of English words on here.

Questions from the audience included one about how to deal with climate change deniers. The answer seemed to depend on whether they were in the category of just being overwhelmed or genuinely in denial. For overwhelmed people, the suggestion was to focus on what they can do rather than all the things they can’t. For people in flat denial it depends on how much energy you have to expend on them, because it can be a lot…

There were also several questions clustering around how can we make work about climate change without contributing to the problem across the life of the work from the idea to it being shown, and without burning ourselves out. One suggestion was to try to work in turn with other people and organisations who are being environmentally responsible or that are providing tools so you don’t need to be inventing solutions all the time. Remember to listen, share, leave a legacy, be honest about your motives, don’t overcomplicate.

Looking after yourself as an artist or an activist is also an important first principle, doubly so if you’re disabled. You can’t help anyone else if you’re completely wrecked from not taking care of yourself. We ended with some lovely suggestions: Be patient with yourself, don’t pressure yourself, and be aware of yourself and your needs, which are also valid.

Graphic notetaking done by Roberto Sitta from Creative Connection, who joined us for the afternoon.

Rachael Young — Our Bodies: An Island

How to write a Kick Ass Application