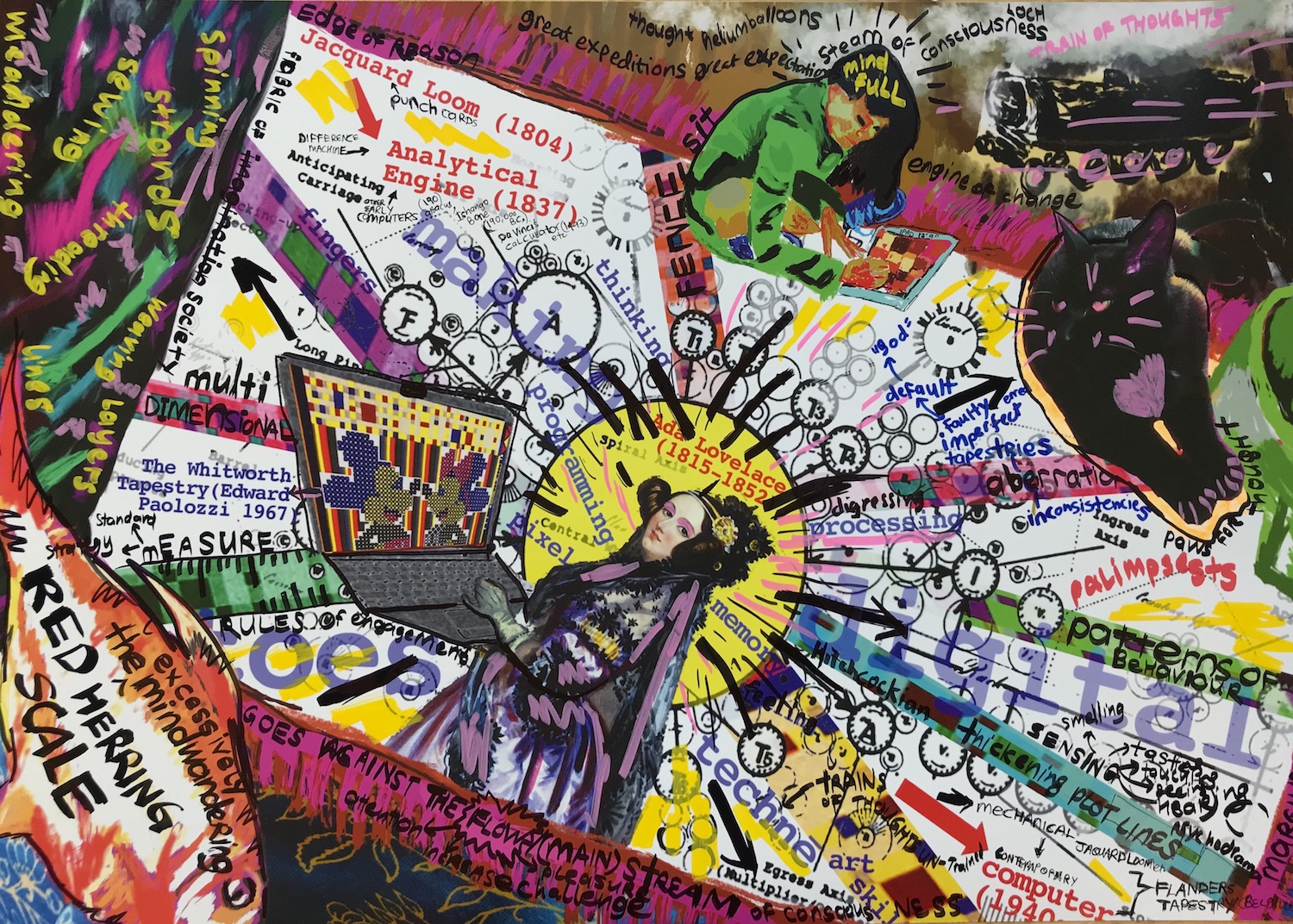 This week is Neurodiversity Week! To join in on the celebrations, we’ve compiled a list of some of the artists we’ve supported who identify as Neurodiverse as well as the projects they’ve worked on.

Kai Syng Tan – ‘We sat on a mat and had a chat and made maps! #MagicCarpet’

Channelling the exuberance of Grayson Perry’s tapestry art, #MagicCarpet contains Kai’s lived experience as a mind wandering extraordinaire. The project tries to create a creative space in which to explore the lines between ‘normal’ and ‘abnormal’ behaviours, imagination and pathology, art practice, and scientific research. Irritating existing assumptions, the work questions how we relate to the world, self, and one another.

Breathing Room is a large-scale, experiential, kinetic light installation in which a tunnel lined with cones ‘breathes,’ creating a strange and otherworldly immersive experience. From the outside, the mechanism’s beauty and intricacy are the focus of attention, but when inside, the viewer travels through a luminous, gently moving tunnel, leading to an almost psychedelic experience!

Anna Berry created this work in collaboration with engineer Clive Doherty. Breathing Room was the development of an initial indoor installation in a shopping centre which was trialled in Milton Keynes; a political comment on ownership of public space, drawn from the relentless commercialisation of public space to exclude non-commercial interests. Interest in the work’s sensory aspects has, though, led it to evolve into an experiential installation, incorporating lighting design to enhance the sound and movement.

Nwando Ebizie’s ‘Distorted Constellations’ is an Afrofuturist immersive tech installation designed to augment reality using sound, projections, and holograms in order to immerse the audience in the imagined landscape of the artist’s brain.

Distorted Constellations is a multimedia neuroscience and art project exploring Nwando’s atypical perception and the rare neurological disorder, ‘Visual Snow.’ Inspired by this disorder, Nwando transforms the brain into a fragmented labyrinth, creating a visceral new world where reality warps and bends and the cross-modal nature of perception is revealed.

The project consisted of an exhibition featuring an immersive environment, performance and sound installations, performance lectures, an interactive website, a scientific survey, and accompanying publications.

Have you ever heard of ‘Commucracy’? Inspiring people to re-imagine the structures that govern their lives and defying usual understanding of meaning and belonging, Oozing Gloop’s projection of the world-to-come is run via this new economy of government. Throughout ‘The Gloopshow,’ the audience is taken on an epic trip to find out just what Commucracy is.

Travelling to abandoned islands, halls of history, and places of family legacy, Oozing Gloop hunts for psychoactive solutions for psychopathetic citizens trapped behind the very screens that are there to help them communicate! From the highest to the lowest, they seek to link the universal to the particular to revive the democratic impulse and pose the communist hypothesis.

The project is a direct challenge to the notion that Autistic people ‘struggle with social imagination,’ and also to the simple fact that it is easier to imagine the end of the world than it is the end of capitalism. Glooptopia provides the 21st-century post-capital-culture we’ve been missing, bringing revolutionary zeal and determination capable of opening up radical new spheres of imagination and fantasy.

Since 2010, Touretteshero’s mission has been to change the world one tic at a time. The company, co-founded by Jess Thom, celebrates the humour and creativity of Tourettes and shares it with the widest audience possible to raise awareness and bring about social change. Jess was diagnosed with Tourettes in 2006, and trained as a visual artist and photographer, but has since moved further into the performing arts.

Richard Butchins – ‘The Voice of the Unicorn’

Filmed by Butchins, the aim of the work is to create a unique encounter between each collaborator and the camera, exposing to the audience the world from the perspective of both the artist and the filmmaker. The work explores the alienation, silence, and isolation felt by disabled people and the “Philosophy of Mind” that underpins exclusion (but that could also be used to subvert that same exclusion). It reflects on the variance in experience and representation of disability in two differing cultures.

ABY WATSON is a dance artist, maker, and researched based in Glasgow. Her work, ‘-ISH,’ is a choreography of movement, text, and object, exploring the murky territory that dyspraxia – an invisible coordination disorder – inhabits between the simple dichotomy of able/disabled. The compelling, playful, and honest work is choreographed and danced by a dyspraxic and dyslexic artist with rousing jazz music and uncontrollable objects, making -ISH a dyspraxic performance of real effort (and momentary chaos). It forms an unapologetic exploration of in-between-ness that flourishes with and thrives on dys-function.

ABY WATSON’s performance marries movement, choreography, text, action, and autobiography, with a vibrant neurodiverse energy, and deals with concepts of deskilling, failure, feminism, and difference. Striving to challenge exclusive values in dance and celebrating the creative potential of neurodivergent authorship and visibility in performance, ABY’s solo show has been seen across the UK and internationally.

-ish TRAILER from abywatson on Vimeo.