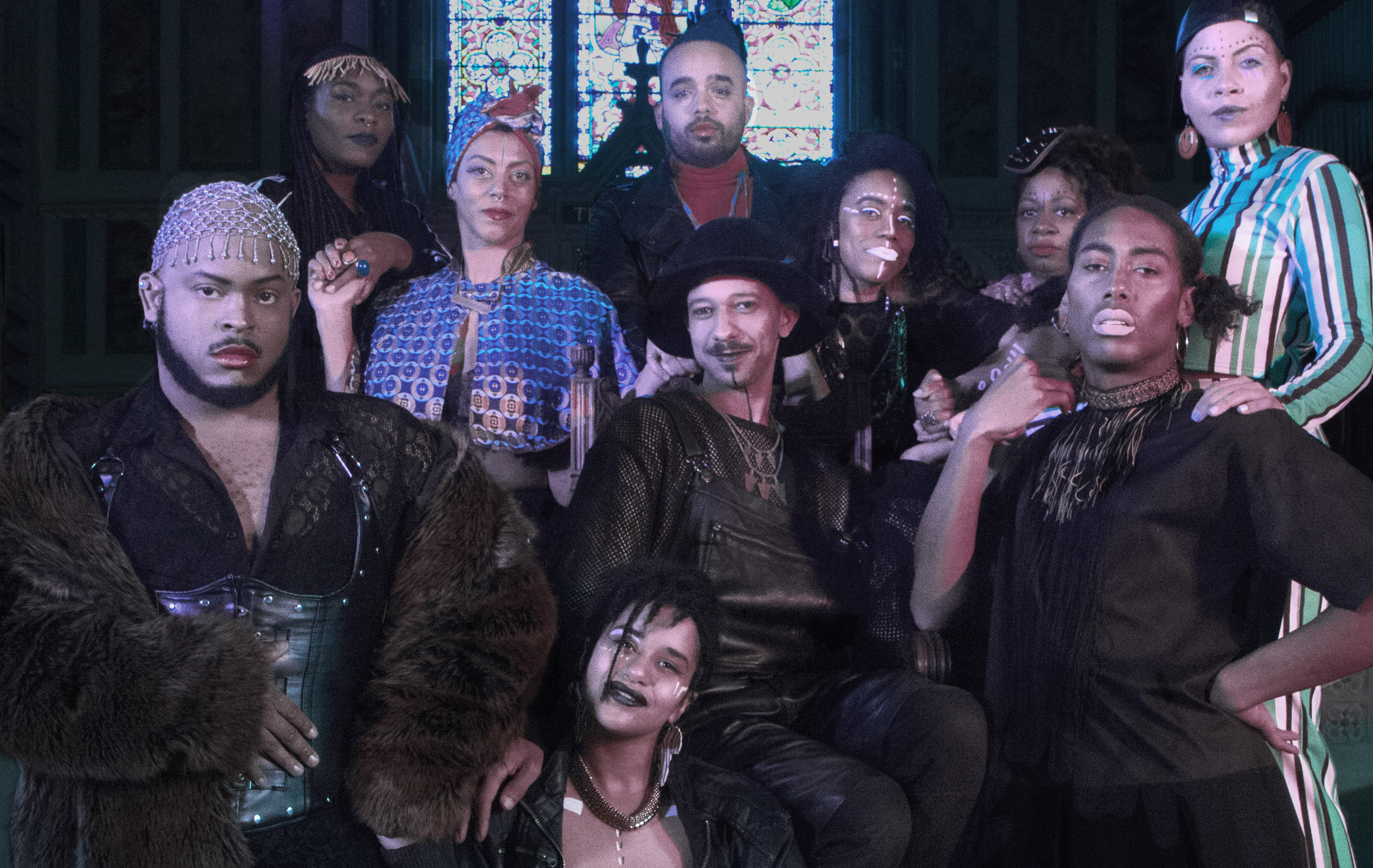 This year Unlimited commissioned ‘Brownton Abbey’, a project conceived and led by Tarik Elmoutawakil, co-director and producer at the Marlborough Theatre in Brighton.

Through a series of workshops, residencies and discussion groups, Brownton Abbey has created spaces to investigate intersectional perspectives of disabled, queer, people of colour and subvert accepted power structures. Tonight it culminates in a performance party at Brighton Dome at 8PM, followed by gathering and panel event on Saturday afternoon. Watch lead artist Tarik’s vlog to find out more…

For a transcript of their discussion see below.

Fiona Slater: We are incredibly excited by the performance party on 25 May, at Brighton Festival. You’ve described this as a ‘kaleidoscopic off-world temple’ – what can people expect to see?

l: Brownton Abbey has been described as a kaleidoscopic, ‘off-world’ temple. By this I mean one that it’s kaleidoscopic because it’s going to be very colourful, it’s gonna be maybe psychedelic; in terms of its aesthetics it is kaleidoscopic because the room will be very full. There will be things happening all over the place: in the main auditorium, in the main place, on the dance floor, in the stage, in the bar area, and also in the secret room; even in the corridors.

It’s described as ‘off-world’ because it is inspired by or uses Afro-futurism as a tool to play with otherness; to be treated as an ‘other’. As a queer person of colour with a couple of disabilities, it is very rare that I would find myself reflected in culture and I’m interested in creating spaces that queer people of colour – especially those with disabilities – are able to centre themselves.

It’s described as a temple because I wanted to create a space that was spiritual – one we can have fun in, one where we can party in. You know, often my most spiritual moments are felt on the dance floor when I have somehow risen above all the things bringing me down and somehow through the act of dance I am elevated into a new state of consciousness, and same with viewing, watching or participating in performance’s as well. So for me there is something about creating a space that really allows us to be spiritual beings and for that to exist in a way that makes sense to us, as multiple marginalised people. People who are often not seen in spiritual movements and to see what it will be like to kind of create our own spiritual movement as it were.

FS: There are some pretty exciting names on the line-up for the evening – tell us more about the people involved in the Afro-futurist collective?

TE: There are some really exciting names on the bill for Brownton Abbey – we have Ria Hartley, who is a live art performer; they work across a whole lot of different mediums and are very invested in self-care and in learning how to make space for artists who have needs, especially if they are disabled. Ria Hartley is going to be creating a piece that will be focusing on breath. They will be creating a space that allows for audiences members to gather and have a sort of blissful, peaceful moment that also raises energy. That will be in a separate space in the main auditorium. It’s about raising vibrations and I’m particularly interested in this piece because, as a non-drinker but someone who loves to party, I love the idea that there is somewhere we can go that collectively kind of creates a hum; something that will make us all vibe together, connecting with ourselves and the universe and then, having done that, we can then go out and party like we have never partied before.

We are also working with Malik Nashad Sharpe, who is a dancer. We have worked with Malik before on a number of occasions at the Marlborough venue, which I produce and programme at. Malik is one of my favourite artists – they are so warm. I did a dance workshop with them; I was a participant with them and they created this practice – it was a dance class, but it didn’t feel like a dance class that I’ve been to before. It allowed all different kind of bodies to move in the space that made sense for them. The movements that were given to us were suggestions and ones that we can find ways that, for our own bodies, made sense to work with.

We also have Lasana Shabazz who, again, I have worked with a couple of times before – dance, visual arts and that. Their dancing is extremely visual, they often use projection and sound and their work often focuses on calling out and highlighting racial inequalities in a really vibrant powerful, punchy, dance routine. And we also have Rachael Young, who has been working on a piece of theatre and dance performance inspired by Grace Jones. Rachael will be bringing an excerpt from this piece that’s to do with rebirth.

We also have Big Freedia, the ‘Queen of Bounce’ as they’re often known as. Big Freedia has her own Netflix show which you should totally go and check out. Her live show has been incredibly energetic. You can do a Google search for Big Freedia and you’ll have plenty of stuff come up; you’ll also find some stuff connecting her to Beyoncé! Big Freedia is definitely one to look out for. We also have DJ sets performed by Sista Selecta and Dj Jumo. Sista Selecta is an amazing couple of DJs and artists and they are also going to be making the costumes for the evening as well as playing music. And DJ Jumo is another Brighton DJ – the founder of Gal Pals, a femme club night.

FS: You are also hosting a series of wraparound workshops and conversations. What themes and discussions will you be exploring in these?

TE: As part of the Brownton Abbey suite, as I’m thinking of this project, there are some wraparound workshops. We have had a couple already – one of them was called The Pleasure of Playing and the other one was called Ancestral Constellations. Both of these workshops were radically exclusive in that I was specific that they were for queer people of colour to attend, which is different from the main Brownton Abbey events, which are radically inclusive, which I’ll talk more about later.

Ancestral Constellations was a beautiful workshop held by Sonia Welch-Moring and was a technique to call up on our ancestors and to use their guidance to ask questions and seek answers – divine answers about our families, our communities, our relationships. We also had another workshop called The Pleasure of Playing, which was facilitated by an amazing performer and long-time clown artist called Angela de Castro, or just de Castro as they liked to be called, and that was a really light hearted afternoon of playing games, really co-operative games, but each game had a purpose and highlighted something dramatic. It brought out ways of playing, playing with life, being present for life, finding the joy in the smallest of things.

FS: The spaces you are curating have been described as both ‘radically inclusive’ and ‘radically exclusive’ – why do you think it’s important to offer activities and opportunities that ring-fenced for people from marginalised communities?

TE: So, a little bit more on radical inclusivity and radical exclusivity, which to me I think, are both very important concepts. So the main Brownton Abbey event is radically inclusive, and I want it to be for everybody, all walks of life, in terms of levels of access for disability, and it’s something we have given a great deal of thought about. We will have BSL interpreters and we will have wheelchair access all over the building. The Brownton Abbey project is playing with both radical inclusivity and radical exclusivity, so radical inclusivity seeks to make space for everybody, to make sure that we are including people with disabilities, any sexuality, gender presentation or identification, different races, different cultures…

We want to make sure that this a space that gets to the root of the reason why some people from marginalised communities can not normally attend these events. So, in this case, that means giving out some tickets to certain community groups, it means making the space accessible in as many ways as we can muster. That includes BSL interpreters, that includes touch tours for blind audience members, that includes pulling out some information in advance for those with anxiety, and allowing a tour of the building in advance, so audience members have an understanding of how the space looks so when they come in it’s not too overwhelming. That’s radical inclusivity.

Then, I’ve already created a type of wraparound event geared towards a particular, focused group, and those ones are radically exclusive. By this I mean they are for particular marginalised groups, but for the purpose of creating space so we can get to the route of our problems in a close-knit situation. This allows us to progress in ways that are really understanding each other’s inherent experiences of life in many ways, and just allows us to centre ourselves, because often this doesn’t happen.

For me, radical exclusivity is important as radical inclusivity; both have their place. For me, it has been really important to create spaces especially for queer people with colour. As someone who identifies as such in part – and obviously I identify in many different ways – it’s been really healing to have spaces that are just for queer people of colour.

FS: Following the event at Brighton Dome you are keen to develop the project further nationally and internationally. Where would you like to see the work in 2 years time?

TE: I would love to see Brownton Abbey developing further beyond the Brighton event because the issues that it’s seeking to connect with are ones that are both national and international, and ones that I feel large organisations and institutions are also very keen to engage with. At the moment they’re not always sure how, and I think maybe Brownton Abbey is a really good vehicle for looking at intersectionality, in which the things that make up our identity is not just singular; I’m not just a queer person, I’m not just a person of colour, and I’m not just a person with a disability. A lot of these things combine together and have their own particular way of interacting with the world.

For me this is a really important project, and from my understanding through conversations with other institutions it’s something that they seek to engage with, and so I would love to see Brownton Abbey touring the country; I would love to see it touring internationally, I would love to take it to New York. I would love it. The idea for me is that everywhere it will go it will connect with the community in the space, and so it would be different. It would be artists that we would tour with and also there would be new artists each time, maybe with some new artists and some artists that have the experience before, so it’s never ‘we pick people up and drop them’, but also we will always engage with what is happening in that community there. So it will be a project that will be different wherever it went and that it will continue to be exciting and to grow and to evolve… Who’s not going to want this?

Brownton Abbey is at Brighton Dome TONIGHT at 8PM. For full details and to book a ticket go to: https://brightonfestival.org/event/13583/brownton_abbey/