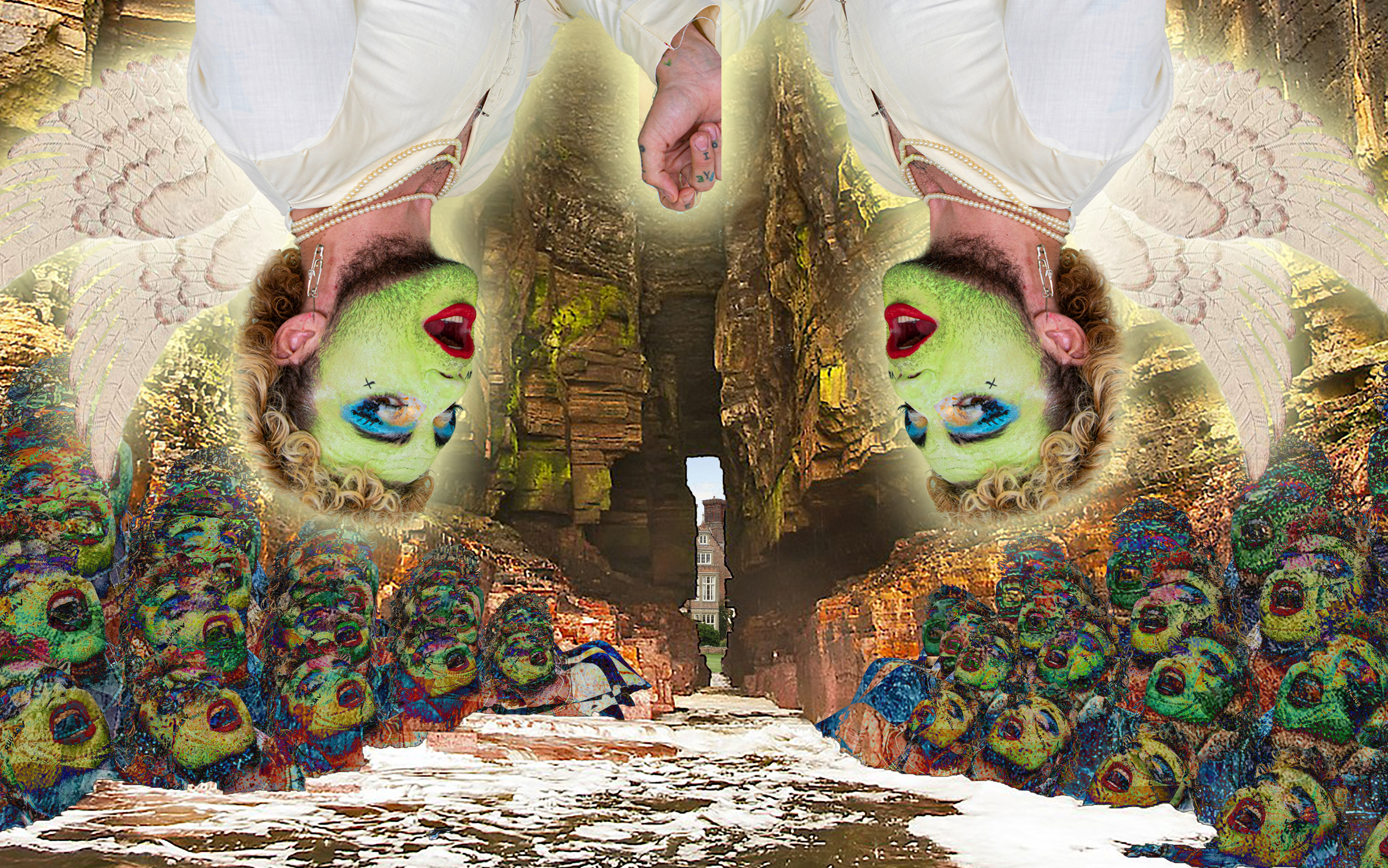 Last year, we embarked in a multi-year collaboration with Malborough Theatre as part of their New Queers on the Block project, showcasing some of the finest international queer work and touring it around England. We’re pleased to announce the co-commissioning of a new performance work by Oozing Gloop, which will be a psychedelic, ephemeral, magical experience that inspires people to re-imagine the structures that govern their lives. We asked the artist to tell us more about the project.

What is the project about?

An ideal world that doesn’t deny our less than ideal qualities; but in fact affirms them to create a deeper solidarity and understanding of one another to move forward to the future with. It’s a wonderful place! A world cut in half by a gigantic dam, run entirely on renewable energy and automation!

It’s also about the potential system of Commucracy existing within the premise of Glooptopia. Which put simply is an answer to the question: “What happens the day after the revolution?” This is a direct response to theoretical questions raised by Slajov Zizek and Jacques Ranciere and addresses a major hole in 21st century egalitarian practice. Currently we have no alternative to advocate for. Communism is stained by Stalin and Democracy has become the plaything of the rich. Currently we can’t even get Jeff Bezos or Starbucks to pay tax whilst nurses use food banks. Commucracy aka communist democracy is the bastard child of both with the sins of neither, it is a new economy of government designed around personal liberty and communal engagement via the sublimation of liberal rights to the level of property rights. Basically it’s a world where we start seeing people as more important than things, and as having a right to things, and that world is Glooptopia!

Finally it’s about applying chaos magic to the manufacture of public political spectacle. The fact that the personal is political and if you change yourself you can change society. I will travel to an abandoned island where the “Gloop” exists before revisiting an ancient hall I spent part of my childhood in (Barningham in Norfolk). In this process I hope to travel into my unconscious to meet my guardian angel, to manifest it as the first saint of Commucracy and therefore the future safeguard of Glooptopia. This is to help hack the conscience of a psychopathetic generation, trapped in ennui and worthlessness staring at screens via psychoactive undertakings that dazzle and delight!

Why this project now?

Because it’s easier to imagine the end of the world than the end of capitalism. Glooptopia seeks to be a new imaginary, a new point of fantasy to strive for, or spark discourse around. I don’t for one moment presume to present anything more than a dream. But we have forgotten the importance of dreams to our political landscape. Thus a pure fiction, the promise of £350 million extra for the NHS was printed on the side of a bus and driven round the country. Utopia has become a dirty word in political circles, but it still functions, thus the only people who have the ability to use it are reactionary conservative elements who offer the old “remember when…” ignorant of the fact we have moved forward through time and to go back is impossible. The utopian claim that Brexit would save the NHS might actually result in the loss of the NHS, something which the architects of this farce feel no guilt around.

There is a fantasy in the notion of our society self regulating capital and can just go on when actually the biosphere is crumbling, the icecaps melting, we live in perpetual war and recently in the UK over 130,000 disabled people have died due to austerity cuts. My autistic peers have died in this process, I could have died in this process. However just saying that doesn’t make any difference. Pointing out any of these things is pointless, because if it was going to work it would of by now.

Thus this project is a positive projection of a future world glinting on the horizon! Not another miserable dystopia, because dystopias like “the hand maidens tale” or “1984” have done a lot to help us describe, but little to resist the forces they depict. This is an energetic, exuberant endeavour! A proactive power house of suggestions and alternatives across the radical, real and rambunctious! Designed to tickle your fancy and tear up the rule book of what’s gone before to revel in the fact that- we, the people! Decide our fate!

What spaces and contexts do you hope to show the work in?

Any space and every space can become a site within which Glooptopia can be shown. It is ultimately a series of practices that perform research into Utopia. An exciting element of that has already been used at Knotty Festival in Hastings is the “Glooptopia Coffee Morning” format; in which a coffee morning is established with piles of paper provided- and pens in all manner of colours. Any attendee is then invited to draw around the stains to draw out a certain shape they see or imagine, and then in conversation with Oozing Gloop, avid fantasy enthusiast, this new figure is integrated to the the Glooptopia universe. This is really enjoyable as it makes radically transgressive drag accessible to whole new audiences. There is also research into 1 on 1 performances and domestic settings too, all with a shared aesthetic practice.

Also there is a strong theatrical element as there will be at least six showings of the research in black box settings. However in this I hope to have the audience sat in a circle around the stage so every show is in the round and the social focus comes forth. The idea is to create a manifest theory of liberation theory mixed with spectral images that can seep through anywhere and haunt the viewer, causing pleasant shivers every so often!

The ultimate ideal space for this project would be in VR, virtual reality. However given this technology is brand new, and often expensive we do not want this to be a barrier to anyone participating. Further we would perhaps need new partners to support us in undertaking this aspect, so elaborate are the expertise required.

What partners are involved beyond the Marlborough?

Oozing Gloop is running a LADA DIY supported by DaDaFest in September. Collectively they will hammer out the shape and structure of Commucracy, the principle that will structure Glooptopia. They will also be doing a residency at Performance Space in Folkestone and hopefully Norwich Arts Centre.

GLOOPTOPIA will premiere in February 2020 with the New Queers on the Block Tour at Attenborough Centre for the Creative Arts (Brighton), Theatre in the Mill (Bradford), Home Live Art (Hastings) and Art BnB (Blackpool). Dates and tickets on sale soon!

“Oozing Gloop is an incredible artist with whom we have loved to work with over the past year at the Marlborough Theatre and through the first leg of the New Queers on the Road programme with their first project, ‘The Gloop Show’.

Having the opportunity to put a strong commission and support package for Gloop to be able to create at their own pace and with the appropriate resources and context for them to thrive in, is something we are incredibly proud of.

We believe their work is uncompromising and vibrant, and cannot wait to take it on tour across the UK next year for the next stages of New Queers on the Block.”

New Queers on the Block