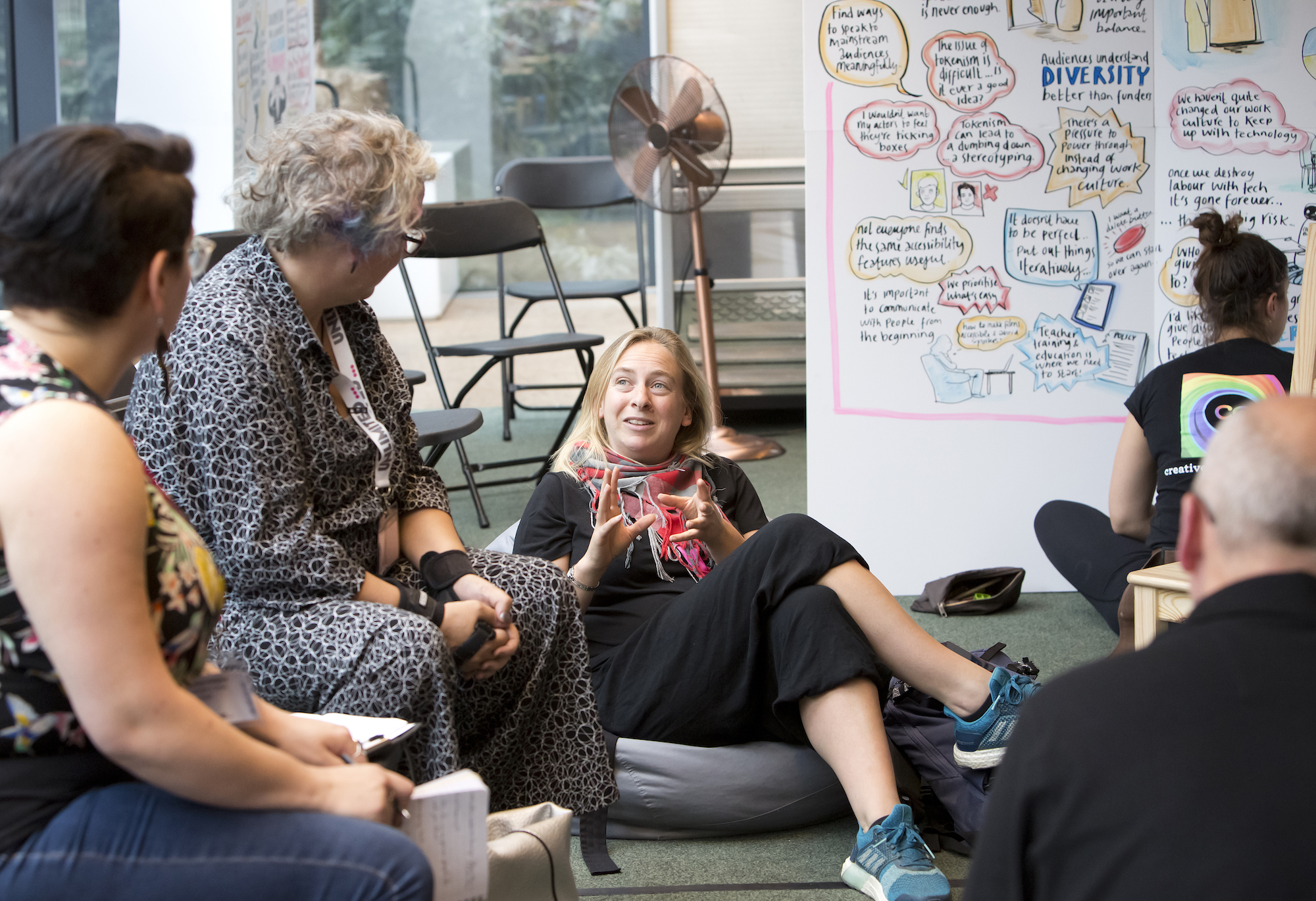 Now the dust has settled and all our evaluations are in, we have updated our access statement for a fourth and final time. Jo Verrent, Senior Producer, gives us the headlines of where we succeeded and where we still need to work harder on access…

Delivering Unlimited: The Symposium was one of the most challenging things we have done since Shape Arts and Artsadmin began delivering Unlimited in 2013. Our own high standards, the expectations of the sector and those of our audiences meant there was a lot of pressure on trying to get the balance just right between many (and often competing) access needs and varied opinions on what constitutes best practice.

We wanted to find out just how well we’d met the needs of those who attended so within our evaluation we asked delegates how they found the access. Most people found it suitable with 94% scoring it as a 3, 4 or 5 out of 5 (for a full breakdown of all responses, please see our full access statement version 4).

We asked more specifically if people felt their access requirements were met and again 92% responded ‘yes’ or ‘somewhat’. We then drilled down into some of the specific provision.

We loved working with the Unicorn and the majority of attendees really loved the space – and in particular the Unicorn staff were repeatedly praised for being friendly and helpful.

Finding accessible spaces for large numbers of people including a high proportion of disabled people isn’t easy as we detailed in our original blog post. Some attendees mentioned structural things such as the number of lifts, number of windows and the size and locations of spaces within the building such as toilets. We’d join the swelling numbers of people calling for more and better access across the country including our capital city.

The structure of the event

We gained great feedback on the value of our Introduction Day, which had less people, a welcoming atmosphere and a more relaxed feeling overall which served to make the environment of the spaces more calming and less overwhelming. We offered this to international attendees, those from organisations who might not have known a lot about Unlimited and anyone who wanted a chance to get to know the space before the full event began.

The breakout sessions after the main provocations were liked by people who found the variety of spaces and the chance to be part of the conversation useful. Some people were confused about where the breakout sessions would be, and who was involved in each one. A few people commented that this could have been signposted more clearly which is something we really take on board.

The language level of the event was fine for most people – although we had criticisms at both ends too. Some people felt it was too simple and not deep or detailed enough, whereas other people felt that the terms and language used were complex and alienating for them. We had hoped that including one smaller breakout group with additional live drawing as support might help those who found the language and concepts hard, but not everyone who needed it, again maybe through lack of signposting, found their way to this space.

Other suggestions that we have certainly taken on board included: improved signage, a floor plan or map, a delegate list and clearer information about where the lunch options were for those with a dietary requirement. We also really liked the suggestion of a ‘matchmaker’ or facilitator to introduce people to each other as relevant to help with networking.

We took advice on best practice for audio description in advance of the event. As it was a talk-based event, we knew that it would be easier for visually impaired delegates to follow the speakers compare to deaf or hearing impaired people in that environment. We also knew from past events that many visually impaired people feel that their needs are often less visible and therefore less recognised by others. Therefore we opted to ask each person to describe their own visual content (prompted by chairs and hosts if needed) rather than having a separate audio describer in the hope that this increased ‘visibility’ would serve to make a longer term impact too. This was liked by some, but not by all.

We know some people struggle with auditory overload when listening to a describer alongside a presenter and that the person who created visual content is often the best person to describe it, as they know what is most important about their image or diagram. Equally we know that, like many other access options, more people find them useful than just the ones we might expect – including some people defining as neurodivergent or who define as learning disabled. At the event we had just as many people saying how useful it was to them as those who found it annoying.

Our roving audio describer however was a useful addition as she could provide additional description if people requested it. Next time we would ask people in advance if they plan to use this service as she was in such demand she couldn’t meet supply. Many people also requested and brought their own access worker along too without charge, so that they could provide this service too, alongside guidance support.

There is always more…

We know with access, there is always more you can do. For instance, whilst we had hired a number of beanbags and bought in cushions and mats, some people said they would have liked even more of them to be visible in all the spaces. Our ear defenders were popular too – to the extent that many were not returned at the end of the event! Having made the financial outlay for much of our access kit – we are delighted to say that we’ve been able to create two ‘relaxation’ kits with the materials we do still have, one for Shape Arts and one for ArtsAdmin, so now even more events can become more accessible as part of the symposium’s legacy.

Although we are not planning to run another Symposium, these findings and feedback will enrich both Shape Arts and Artsadmin’s future events, as well as those of our partners (with whom we will be sharing all of these insights). Also, we hope, that in the creation of an Access Statement Version 4, you will also be able to learn from our mistakes and/or build on our successes.

And our Symposium Venue is…