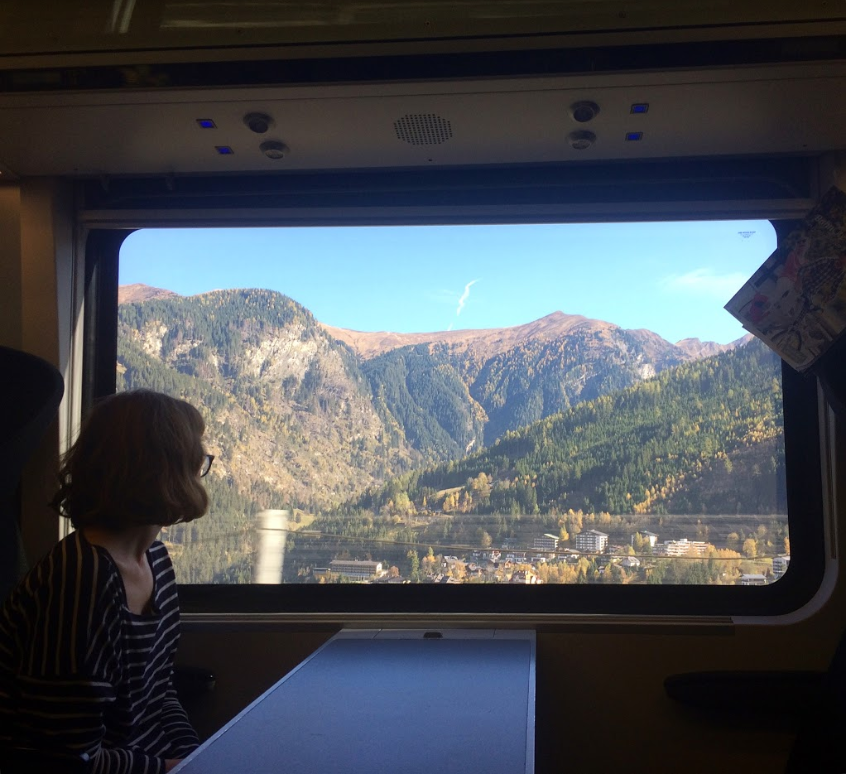 On the journey through the mountains. Image credit: Rachel Clarke.

Priya Mistry travelled to IETM 2019 in Rijeka without boarding a plane. Here, she shares her reflections and critical observations from the journey. Priya explores what it really means to be getting from A to B in the Global Art Climate.

“Television sells back to you everything it takes away from you; while you’re watching people travelling through mountain-scapes, making love and drama, or filming a documentary memoir, you are not among mountains, having a relationship, or filling your life story with stuff. You’re watching television.”

#Acts_Of_Slowness
What is Slow Travel?
Trains, buses, boats, cargo boats, no flights, less carbon.
It is:
The journey and not only the destination
A conveyor belt of film locations
Visiting places you definitely didn’t dream about seeing
Realising your geography is off
Making it up as you go
Navigating a plethora of schedules

Joining the Circus
Many organisations and activists are “declaring a climate emergency,” but what are we doing about it? Many performance companies tour on short-dates culture, fly, pass through theatres but don’t really see the place they are visiting. The carbon footprint is inevitably high, the cultural presence transitory and compact.

Artists, programmers, and academics all require travel. How does one sustainably engage with the globalised arts sector? This conversation was central at IETM (an international gathering of international arts professionals).

(Re)framing the International: a card game for art workers – Marijke De Moor & Joris Janssens from Flanders Art Institute, Belgium.By offering the player scenarios, this game encourages critical reflection on international working. Navigating the problems embedded in the game, which are all too common in real life, it forces us to question what we do and why.

I played with an Italian Project Manager and realised that if I was an artist based in Italy, I’m not sure I would make a living or life as an artist, in the way I do in the UK. It’s a quick lesson in the complexities of working across nations, how avidly local economy and politics determine co-production and creative practice. Ultimately, it asks: what if we shift priorities, centring our decisions on well-being? Or climate sustainability? Paying artists for their work, and not (simply) making the work happen? What would this look like? How would a Project Manager achieve this? Is it even viable?

A piece of advice: avoid night trains in the Alps, you’ll miss the view you paid for.

Life Modelling by Railway
What if….Flexi-working allowed you to be a digital nomad?
Universal Basic Income replaced incomes as we know them now?
We all had 3- or 4-day week instead of 5?
The country shut up shop one day a week everywhere.
Annual leave was 120 days, not 28? What could you do with that time?
And what is time? Standardised time was first adopted in Britain in the 1840s by railway companies, so everyone would know when a train would arrive and leave.
What if we didn’t base our decisions on that which we deem to be most ‘efficient’ or ‘productive’ or fast? Is our idea of efficiency really efficient?

UK > Australia. Train, Bus, and Cargo Boat (no flights!)
My next working challenge is truly global. Leaving the UK on February 15th 2020, I will head for a Research Residency in Australia with Critical Path in Sydney, attempting not to fly. Favouring instead train, bus, and cargo boat.
At the time of writing, I am still preparing. It’s Visa forms, vaccines galore, biometric fingerprints, and planning for air rescue in the middle of the ocean. And, now, circumventing the Coronavirus.