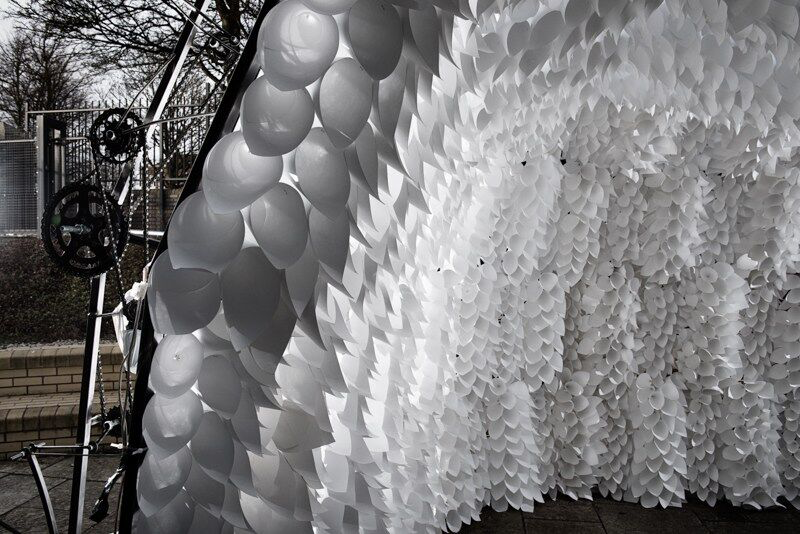 Breathing Room is a large-scale, experiential, kinetic light installation in which a tunnel lined with cones “breathes”, creating a strange and otherworldly immersive experience. On the outside, the beautiful and ornate mechanism is the focus of attention, whilst inside the viewer travels through a luminous, gently moving tunnel, for an almost psychedelic experience.

Breathing Room is created by lead artist Anna Berry and collaborator/engineer Clive Doherty. In 2017, Anna received an Unlimited R&D grant to support the development of this work in prototype form, which was showcased at the Attenborough Centre, Leicester and Southbank Centre, London. This was the development of an initial indoor installation in a shopping centre which was trialled in Milton Keynes; a political piece about ownership of public space, drawn from the relentless commercialisation of public space to exclude non-commercial interests.

Interest in the sensory nature of the work means it has evolved into an experiential installation, incorporating lighting design to enhance the sound and movement. Breathing Room echoes the original concept of reclaiming the public realm, existing predominantly in the context of urban public space.

Anna and the team have created an Audio Description MP3 file and Access & Inclusion Guides for presenters and the public. The film of Breathing Room will be captioned and audio described. A 360-degree film will enable audiences to ‘visit’ from their homes and can be used as a visual guide to get familiar with Breathing Room prior to visiting in person.

Watch the introduction film below.