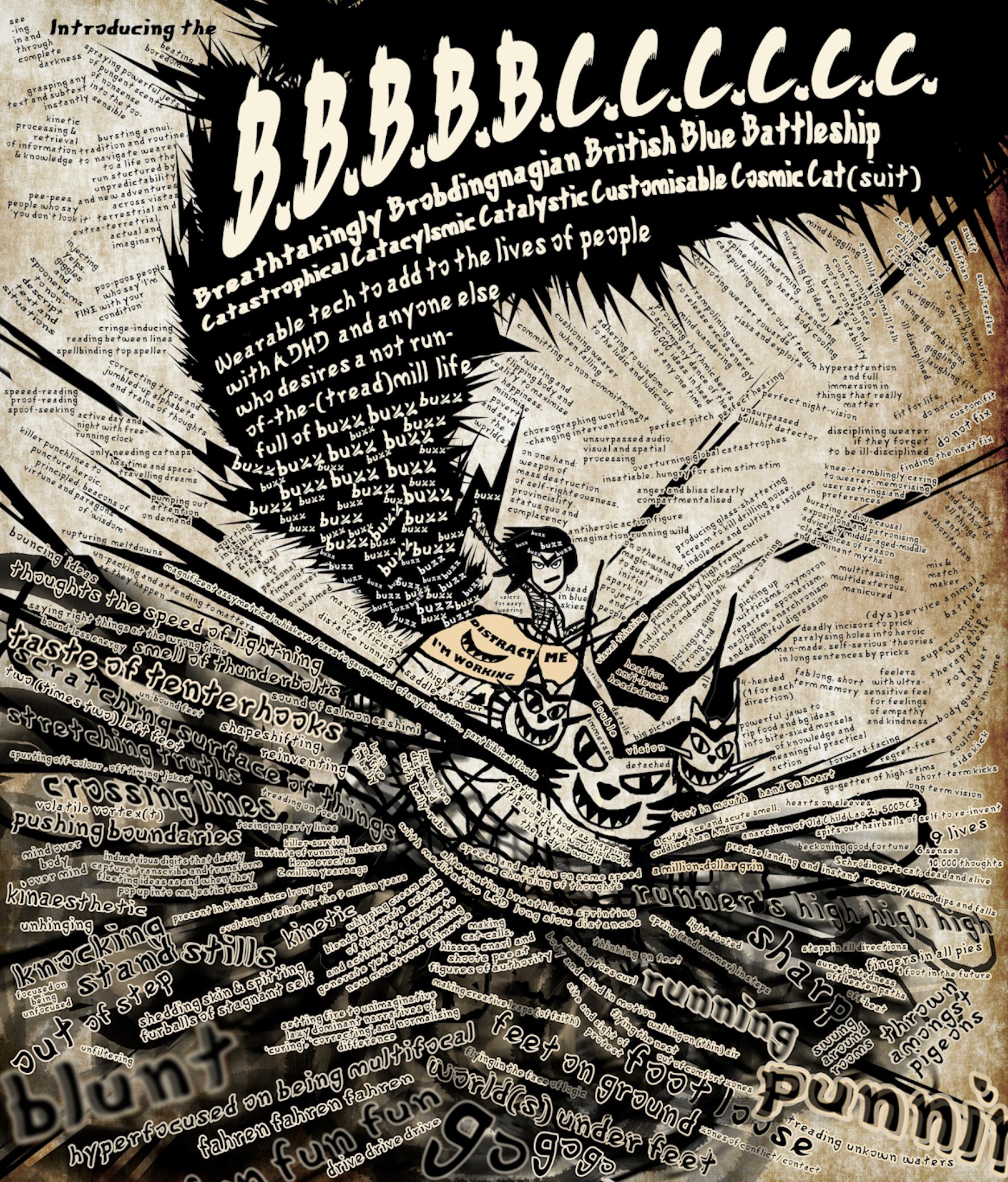 Kai Syng Tan offers us the BBBBBCCCCC – a very useful piece of art – for these testing times, reflects on how COVID-19 impacts and mirrors the lives of Neurodiverse people, and considers the lasting impact of the changes the crisis has triggered within the arts.

Are you struggling with social distancing and self-isolation? If so, in the spirit of #caremongering, allow me to loan you the BBBBBCCCCCC.

That’s my Breathtakingly Brobdingnagian British Blue Battleship Catastrophical Cataclysmic Catalystic Customisable Cosmic Cat(suit). Isn’t she a pretty pussy? What a piece of art. Of course my art is very useful. In fact, she’s a service animal. But she’ll hiss if you put her on a leash! Instead, come, put her on. Embody her. She’s a catsuit. Zips are fiddly, so BBBBBCCCCCC comes with sexy elastication and velcro. Is she squeezing you at all the right parts? You’ve missed that haven’t you from the quarantine.

With BBBBBCCCCCC, you can finally visit Lidl’s, go for a solo run and so on — all from a safe two metres away from other humans, as she’s chonky.  BBBBBCCCCCC is super smart too. She grins and maintains eye contact,so that you don’t have to. She’ll also help you with reading, writing, speech-text translations, processing information and listening to boring conversations. But if you’ve been the one responsible forboring chatter, who’s socialised/well-behaved with a neuro-normative life governed by a linear/logical mode of thinking that classifies everything into neat Excel sheets and making all the grown-up/calculated/safe decisions, fear not. BBBBBCCCCCC will redeem you, and empower you to become spontaneous, letting your mind wander, plunge into infinite rabbit holes online/off, take more risks, act impulsively and become a bit more ADHD.

I made BBBBBCCCCCC in 2016, as a response to my Attention Deficit Hyperactivity Disorder diagnosis. After all, Don Quixote has his ass, Heman his battle cat, Lao Zi his bull, Stephen Hawking his chair, Oscar his tin drum and Temple Grandin her Squeeze Machine. BBBBBCCCCCC is a 21st-century wondrousness by way of the multiple-headed Lord Brahma, Giacomo Balla’s Futuristic dog-in-action, modelled after ancient Chinese Daoist maps that position the human body-mind as an active part of the cosmos, which also winks at Jonathan Swift’s stim-galore ‘Gulliver’s Travels’ and Alice’s grinning Cheshire Cat.

I am your classic crazy cat lady (with an affinity for alliteration). Like many neurodiverse people, I find human relations tedious. Aged 14-16, I didn’t talk for two years. I (still) don’t socialise, but can camouflage to get by. I’m child-free. I behave/think/speak like an eight-year-old, but the pitch/tone/timbre/volume of kids’ voices drive me barking mad. Each kid emits 58.6 tonnes of CO2 annually.

I’m single, as I’m single-minded and hyper-focused about my work. Down-time/me-time is vital. To regroup/reflect. To muse/self-amuse/feel bemused. And, just as I have been social-distancing and self-isolating before they became de rigueur, I was practising mindfulness before it was part of the $4.5 trillion global industry: my mind is always chocked full. It’s fast/furious, weltering in ‘weltschmerz’ — a world-weariness and melancholy — racing, in anger/analysis/excitement. Every issue demands attention.

Of late I’m wondering: Why has a ‘pandemic’ been declared only when white bodies begin to fall? Why has it taken such a global crisis — not the biblical floods/bushfires, nor mass protests by women and children — to make authorities that have prided themselves on their moral bankruptcy/misogyny/racism to act?

Back in January, did I make the right decision to cancel my work trip to Asia? Not in fear of being infected, but to save others the trouble of worrying if I am a (natural) carrier of the ‘Chinese virus’? What would Beuys, Warhol and Rembrandt say about how we’re all digital artists now, with our 15 seconds/months of fame (can the bandwidths cope)? My gigs in Berlin and Edinburgh have been postponed, and my exhibition has been cut short, but if the RUN! RUN! RUN! Biennale can’t happen this year, should I call it a triennial (or ‘Documenta’, which has ‘rediscovered’ South East Asia)?

Three weeks ago, my bike was stolen. Two weeks ago my phone was snatched by someone on a bike — wait, was that my bike? Grass-roots volunteering efforts, arts funding bodies/networks and mental health bodies are demonstrating that kindness and care are what really matters, and we now grasp whom ‘key workers’ of society are — will hedge-fund workers and bankers go underground? ADHD Action advises that ‘if you need time to vent, worry or wallow, set a time(r)’, and if Colin says that he can’t sell Big Issue anymore from this week onwards but dreads the boredom, could we watch Godard’s traffic jam or Herzog’s disoriented penguin on loop? Will social distancing and self-isolating, what many neurodiverse people may be familiar with –– become the new ‘norm’?

But my practice is incredibly social. Promiscuous/greedy/shameless/unfiltered, I interact with members of different species across disciplines/sectors, activating art as processes for dialogue and productive antagonisms. Only being in the ‘art world’ bores me to death. Runners, geographers, laptop composers, dancers, psychiatrists, mental health experts, computer scientists, and even noisy children, you name it, I’ve worked with them. As I shared with an EU-funded consortium of neuroscientists, geneticists, and others last week online, in a lecture meant to be held in Frankfurt, the COVID-19 crisis has proven the importance for collaboration across silos. And, while no magic potion or bullet, this should include people who are neurodiverse, and pay homage to other neurodiverse female artists/activists.

I also reminded medical and medical humanities students in another online lecture that it’s time to take creativity and play seriously. That’s why art matters. Olivia Laing says that art is not as respite, and cannot force behavioural change, but it can be a ‘route to clarity, and it can be a force of resistance and repair, providing new registers, new languages in which to think‘. I would add that it is precisely when resources are scarce, when minds are closed, when news is faked, and people more tribal, that art can and should up its game. It can open up platforms for dialogues, playing on its ambiguity and complexity to provoke new insights and questions.

That’s why I’ve, kindly, offered to share BBBBBCCCCCC with everyone. Just remember to wipe her down with antibacterial gel when done. Then sprinkle lavender oil all over her. Just leave her at my door. Cheers.

Kai is an artist, curator, consultant, academic , Unlimited artist and selection panel member. The BBBBBCCCCCC is in the Wellcome Collection Images Library. An earlier edition was exhibited at Whitworth Art Gallery (2016) and Craft and Design Centre (2020), both Manchester. Join the Neurodiversity In/And Creative Network.

Resources for disabled artists and freelancers in response to COVID-19