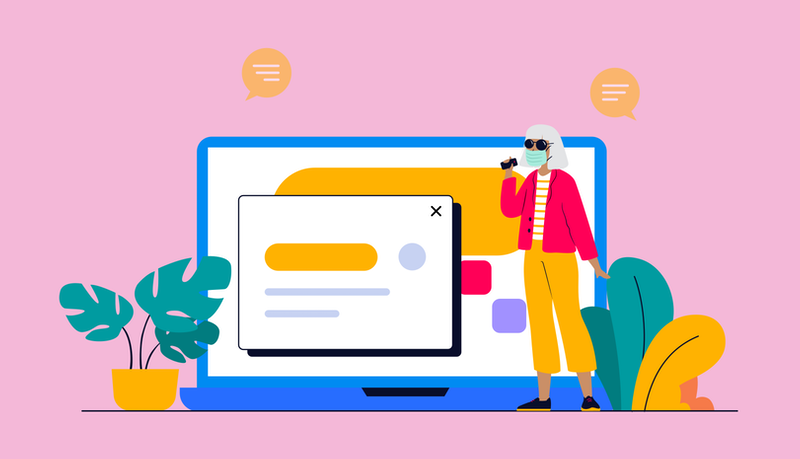 Ten months since the beginning of lockdown, Unlimited trainee Alistair reflects on everything we’ve learnt about accessible sharing online in a year where ‘Zooms’ have become all too familiar…

Since some of us shifted to working from home, there has been a lot of learning (and a lot of learning from mistakes…), including here at Unlimited. Among our blog posts since March 2020, there have been many reflections by artists on what has and hasn’t worked for them in terms of accessibility and inclusion during the pandemic. At Unlimited, we had to move online at very short notice, with real world consultations, sharings, meetings, Unlimited Connects events, and the Unlimited Festival – originally planned for summer-autumn of this year – having to go 100% travel and contact-free, including the whole Unlimited team’s daily working processes. So, we thought we could offer some of our own observations from trying to bring people together digitally, rather than face to face.

Video conferencing is exhausting, alienating, and unnatural for almost everyone. It’s probably safe to say that nobody is thrilled by the prospect of another video meeting right now, even if it’s a necessary or worthwhile one, let alone one of the fruitless, gratuitous ones that are happening as regularly online as they used to offline, but there have been definite wins for some people. The move online has been a revelation for many of those forced to isolate even before the pandemic, or those for whom the inaccessibility of travel has been a partial or total barrier to in-person events and meetings. But people with sensory disabilities can be even more excluded from online events than they are from live ones when the video sharing platform is stuttering, freezing, or generally glitching out, which unfortunately happens quite often.

There are also inherent problems that impact all of us in a world of video sharing. People missing cues to speak or not speak and talking over each other (a minor inconvenience or politeness problem for most, it can turn a meeting into an aural nightmare for blind or visually impaired people, for example), frozen video or video in tiny windows that again is simply annoying for some people but totally ruins video calls for D/deaf people who use interpreters, people being muted when they shouldn’t be or not muted when they should, and so on. We’ve found that giving everyone some polite guidance about video etiquette at the top of every meeting can smooth at least some of these problems out in advance; how to attract the current speaker’s attention, or a reminder that some people need time for their screen reader or interpreter to catch up, for example.

In general, the headline is try to be kind to your video sharing colleagues. Build in frequent, substantial breaks. Respect everyone’s time and accept that every person, disabled and non-disabled, has a definite physical or mental energy budget for the day. For disabled people, that goes double and is often absolutely non-negotiable. Also accept that for some people their ‘normal’ is not the same as your ‘normal,’ and for them it’s more productive just watching with video off, or listening and not being able to see the meeting at all.

Think about using the chat box more in video sharing services too, for people who might be more able to interact in that way; not as a secondary or throwaway thing but as their main interface with the meeting. This means monitoring it actively and not forgetting anyone who is using it to comment, ask questions, or raise issues. This might be less relevant if you have users on the call using screen readers, as many prefer the chat to be disabled so they don’t have to battle with two streams of audio. You could also consider giving some people with particular accessibility requirements a back channel of communication and a specific contact or tech support person they can deal with during the meeting without having to air their barriers out loud with every single person in the meeting watching or listening in.

Just as in the physical world, think about whether your meeting or certain aspects of it need to take place in a free-for-all video format, only with selected people, or not at all as a video conference because there’s actually a better (more accessible, more productive, less time-intensive) way to achieve your aim. As well as having an agenda and a timetable shared in advance, and keeping to them, a successful video meeting also relies to some degree on the collective stability of every participant’s internet connection. You could think of every person joining a video conference as another passenger in a ship with finite capacity to hold them all before it starts to sink under their collective weight, both in terms of its coherence as a conversation and its technical limitations.

Having said that, while none of the platforms are perfect, totally accessible, or have anything like a gentle learning curve, in our experience some platforms seem to be generally more stable and reliable than others. The ubiquitous Zoom is ubiquitous for good reason, and is relatively tolerant of some participants having slower internet connections. The accessibility providers we regularly work with for our events, such as BSL interpreters and live captioners, are also overwhelmingly more familiar with Zoom as opposed to other platforms. They have worked extremely hard this year to make video conferencing work better for more disabled people than ever before… listen to their knowledge and expertise.

Artificially intelligent live captioners like Otter.ai are constantly improving, but in our experience still often fail to accurately keep up with live conversation. They’re still nowhere near a match for a human captioner or audio describer. Nobody expects total accuracy, but AIs will inevitably make hilarious, offensive, or outlandishly surreal and wrong guesses at names and specialist language in particular. If you use an AI captioner or transcriber then be aware of the potential for embarrassment in uncorrected automatic transcripts. We suggest you use the human versions if you possibly can, which also supports the livelihoods of these important freelance professionals. Book them as far in advance as you can, because they’re busier than ever with the rise of video sharing.

One high profile alternative video conferencing system we tried was good in a corporate environment where the participants were all in central London on a superfast fibre connection, but unfortunately outside of large cities, the UK as a whole has generally poor internet infrastructure. If you’re lucky enough to have great internet in your area, don’t assume it’s the same for everyone! Some of the fixes may feel a bit silly at first but from experience we can confirm that it’s sometimes possible for some people to make the best of a bad lot by plugging their laptop into the router with an ethernet cable, sitting nearer the router, using a wifi repeater, using a smartphone instead of a laptop or desktop, asking other members of the household to pause on the 4K Netflix binge watching or the Playstation Call of Duty marathon for a couple of hours, switching to a better and more reliable internet provider…

Ultimately, a video meeting is still only as good as the connections of everyone at the meeting. And sometimes the solution to a video conferencing problem really is a version of the old tech support standby of “try unplugging it and plugging it in again.” In this case, “try leaving the meeting and joining again,” because sometimes this will enable the software to sort out whatever problem it’s having with negotiating the mutual connection between participants.

Being kind to your colleagues was already mentioned but remember to be kind to yourself, too. Nobody can get accessibility right for 100% of disabled people 100% of the time. People are disabled in countless ways by societal, structural, and practical barriers, sometimes divergently and multiply. In most cases the only expert on exactly what a disabled person needs won’t be you, in advance; it’s them, as they go about their business and try to do the things they want to and need to… but sometimes they may not necessarily be great at telling you what they need either. Or sometimes they’ll be perfectly clear, but you might not be physically, logistically, or financially able to eliminate the barriers they’ve identified.

In some cases, getting it right and including some excludes others. To pick just one example, relaxed meetings or performances, where people are free to come and go and make as much noise as they need to, are exactly what some neurodivergent and learning disabled people need, but can also be difficult and stressful for blind or visually impaired people who navigate by sound and need to listen carefully, or for people with anxiety or PTSD. But this doesn’t mean you shouldn’t try, ask what more you can do, negotiate, and invite honest feedback because we can all, always, keep on trying to do better.

Unlimited: What have we done since lockdown?