What do Beethoven, Frida Kahlo, Van Gogh, Django Reinhardt and Ray Charles have in common? They were all disabled artists who rocked the world with their creative flair. Throughout history, some of the most influential artists have been disabled. Artist Natasha Sutton Williams lists five innovators to galvanise your own creative thinking.

Having sold only one painting during his lifetime, Vincent van Gogh is now one of the most iconic painters of the 20th century with his lauded landscapes, flowers and self-portraits.

We all know the infamous story of this post-impressionist painter cutting off his own ear, but did you know he had temporal lobe epilepsy and well as suspected bipolar disorder? He was born with a brain lesion made more severe through his extensive absinthe intake. To treat his seizures, his physician prescribed him digitalis (a medicine made from the dried leaves of foxgloves). One common side effect of digitalis is that you see yellow spots. Some art historians argue this is why Van Gogh used so much yellow in his paintings.

In modern times Van Gogh has been publicly idolised as the ‘tortured artist’. He would vacillate between periods of boundless work output to deep dives into depression, which is why many speculate he had bipolar disorder. Regardless, Van Gogh was prolific: during one decade he created over 2,100 artworks (including 860 oil paintings) most of which date from the last two years of his life. He was also a great letter writer, having written over 800 letters, many to his devoted brother.

Simply put, Beethoven is one of the most famous Classical composers of all time. Whether you are consciously aware of his work or not, you will definitely have his tunes buzzing around your brain, as his greatest hits are constantly used in movies, TV shows and advertising. Even the anthem for the European Union is Beethoven’s Ode to Joy. Many people find it hard to comprehend that this composing legend was in fact Deaf for much of his career!

Beethoven played his inaugural piano concert aged 7 and started composing by age 12. He started noticing difficulties with his hearing when he was 26 years old, experiencing ringing in his ears and gradually losing his ability to hear high notes. By his mid 40s, he had become completely Deaf and had to converse with people using handwritten notes. When Beethoven died aged 56, an autopsy revealed he had a distended inner ear, which had developed lesions over time.

Although his hearing deteriorated, Beethoven had absolute pitch. He had played music for 30 years so he could ‘inner hear’ the music and compose complex arrangements knowing exactly what they would sound like. Some of his greatest works were written when Beethoven was totally Deaf, including the Moonlight Sonata, the opera Fidelio, and six symphonies, including the Ninth Symphony, an entirely new sonic innovation, as a choir had never been written into a symphony before.

In recent years Frida Kahlo has become a style icon, with everything from travel cups, pillows, plant holders, make-up bags to face masks plastered with Frida’s unforgettable face. However, before consumers at large took on Kahlo’s complex iconography, she was considered one of Mexico’s greatest painters, known for her surrealist, magical realism self-portraits.

Kahlo had polio as a child and had been training to go to medical school. At 18 she got caught in a catastrophic bus accident which fractured Kahlo’s ribs, both her legs and her collarbone. This accident caused her pain and illness for the rest of her life; however, it prompted her to change direction professionally. Instead of training to become a doctor, she became an internationally celebrated artist. 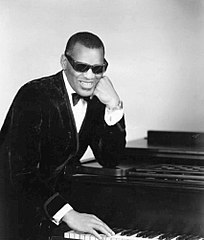 Charles was blinded during early childhood due to glaucoma. He developed his musical talent at a school dedicated to Deaf and blind students, with his teacher training him to play Classical piano through intricate Braille music. He also composed by writing music in Braille. He studied the works of Bach, Mozart and our friend Beethoven, but his real passion lay in the jazz, blues and country music he heard on the radio.

Singing and playing piano with his band, he soared to fame in the 1950’s recording multiple number 1 hits and practically lived on the billboard 100 list for decades. He wasn’t just prolific in his work output: he fathered 12 children with 10 different women!

As the first major European jazz talent, Django Reinhardt remains the most influential jazz guitarist to this day. As a child Reinhardt played the banjo-guitar, learning repertoire from his travelling Romani family and neighbours. This Gypsy musical influence would later be blended into Reinhardt’s masterful rhythmic jazz phrasing.

At 18 Reinhardt was already married (by common law), and living in a caravan with his wife Bella. One night he accidently knocked over a candle, setting the whole caravan aflame. Reinhardt received extensive burns over half the left side of his body, badly burning his left little finger and ring finger. Although doctors prophesied he would never play again, Reinhardt painstakingly adapted his technique, using his index and middle fingers for melody playing, whilst utilising his two injured fingers for chord work.

Partnering with the dazzling jazz violinist Stéphane Grappelli, in 1934 Reinhardt and Grappelli created the legendary Quintette du Hot Club de France in Paris. This all-string jazz band broke new ground as the first to feature lead guitar. They became one most accomplished European jazz groups ever, birthing the new genres of Gypsy Jazz and Gypsy Swing.

Art, the Social Map: An introduction to John McDonald